After three years of construction activity, the 565 m (1,854 ft) tall Beipanjiang Bridge is open. It connects the provinces of Guizhou and Yunnan in southwest China. 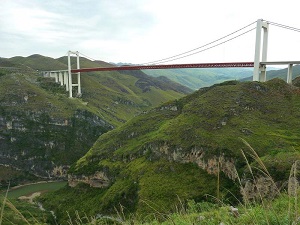 Beipanjiang Bridge in Guizhou Province is open to traffic. Photo: WikipediaThe 1,341-m (4,400 ft) span accommodates four lanes. The suspension bridge was built at a cost of 1 billion yuan ($143 million USD). Construction was affected by wind, requiring a high degree of precision and the assembly of bridge sections on-site.

The Beipanjiang Bridge has surpassed Sidu River Bridge in Hubei province as the world’s highest. The province of Guizhou already boasts seven of the 10 highest bridges in China