In preparation for the total solar eclipse that will occur on 21 August 2017, NASA has developed the most accurate maps of the path of totality for any such event to date. The eclipse will cross the continental U.S. beginning in Oregon and ending in South Carolina.

Traditionally, eclipse calculations assume that all observers are at sea level and that the moon is a smooth sphere that is perfectly symmetrical around its center of mass. The calculations do not take into account different elevations on Earth and the moon’s cratered, uneven surface.

Elevation tables and plots of the lunar limb — the edge of the visible surface of the moon as seen from Earth—are often used to make more accurate maps. Now eclipse calculations gain even greater accuracy based on topography data from NASA’s Lunar Reconnaissance Orbiter observations (see video). 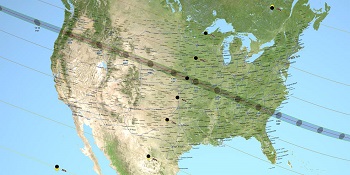 The path of totality for August’s total solar eclipse. Credits: NASA/Goddard/SVS/Ernie WrightUsing LRO, elevation maps were used to create a continuously varying lunar limb profile as the moon’s shadow passes over the U.S. The mountains and valleys along the edge of the moon affect the timing and duration of totality by several seconds. Several NASA data sets were also used to provide an elevation map of Earth so that eclipse observer locations were depicted at their true altitude.

The resulting visualizations show something never seen before: the true, time-varying shape of the moon’s shadow, with the effects of both an accurate lunar limb and the Earth’s terrain.

The lunar umbra is the part of the moon’s shadow where the entire sun is blocked by the moon. On an eclipse map, this tells you where to stand in order to experience totality. For centuries, eclipse maps have depicted the shape of the moon’s umbra, or darkest part of its shadow, as a smooth ellipse.

As evidenced in the new visualizations, the umbral shape is dramatically altered by both the rugged lunar terrain and the elevations of observers on Earth.

By posting a comment you confirm that you have read and accept our Posting Rules and Terms of Use.
Advertisement
RELATED ARTICLES
How the Solar Eclipse Will Impact U.S. Power Production
Watch: First unified geologic map of the moon is released
Watch a solar eclipse from Mars
Duke Energy Says It's Ready to Lose Solar During Eclipse
As the Eclipse Progressed, Here's How California Power Generators Reacted
Advertisement