A Washington State University (WSU) research team has used a mild electric current to kill drug-resistant bacteria, a technology that may eventually be used to treat chronic wound infections.

Led by Haluk Beyenal, professor in the School of Chemical Engineering and Bioengineering, the team used an antibiotic in combination with the electric current to destroy all of the highly persistent Pseudomonas aeruginosa PAO1 bacteria in their samples. These bacteria are responsible for chronic and serious infections in people with lung diseases, such as cystic fibrosis, and in chronic wounds. They also often cause pneumonia for people who are on ventilators and infections in burn victims. 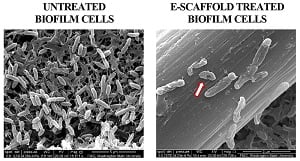 Researchers used electric current to kill “persister” cells that cause chronic infections. The frame on the right shows cells that are under stress from the e-scaffold treatment. Image credit: WSU. When doctors use antibiotics to treat a bacterial infection, many of these microorganisms die. Bacteria that form a biofilm, however, are more difficult to kill because antibiotics only partially penetrate this protective layer. Subpopulations of “persister” cells survive treatment and are able to grow and multiply, resulting in chronic infections.

In the new study, the WSU researchers used an “e-scaffold,” a type of electronic bandage made from conductive carbon fabric, together with an antibiotic to specifically target these persister cells. The e-scaffold creates an electrical current that produces a low and constant concentration of hydrogen peroxide, an effective disinfectant, at its surface. The hydrogen peroxide disrupts the biofilm matrix and damages the bacteria's cell walls and DNA, which allow better antibiotic penetration and efficacy against the bacteria.

Beyenal’s team determined that, for the electrochemical reaction to produce hydrogen peroxide, the current must be controlled carefully to ensure the correct reaction at a precise rate. Their method does not damage the surrounding tissue, and the bacteria are unable to develop resistance.

The researchers have filed a patent application and are working to commercialize the process.

By posting a comment you confirm that you have read and accept our Posting Rules and Terms of Use.
Re: Electric Current Used to Kill Drug-Resistant Bacteria
#1

I recall a similar ''hyper-oxygenation'' process that selectively oxidized/lysed non-indigenous microbes in wounds and not the basal tissue of the organism through ozone dispersal. Not sure but it seems all this started with post WWII burn victims in Europe and was advanced with the earliest research occurring in the 1950's in Poland. 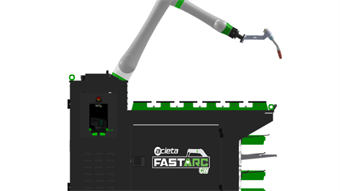