BAE Systems is set to hand over the first armored multipurpose vehicle (AMPV) to the U.S. Army for testing. The AMPV is intended as the replacement for the Army's Vietnam-era M113 family of armored personnel carriers, which comprise 30% of the Armored Brigade Combat Team's (ABCT) tracked-vehicle fleet. 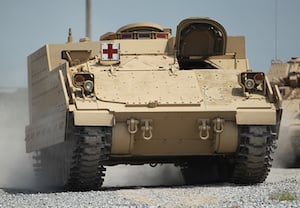 The vehicle weighs 75,000-80,000 lbs. and can sustain speeds of 34-38 mph. Image credit: U.S. Army.According to the Army, the AMPV addresses the M113's shortcomings in survivability and force protection; boasts improvements in size, weight, power and cooling; and is designed to accommodate the Army’s inbound network and future technologies. The vehicle weighs 75,000-80,000 lbs., can sustain speeds of 34-38 mph, accelerates from 0 mph to 30 mph in 24 seconds and has a cruising range (at 30 mph) of 225 miles.

BAE Systems says the AMPV is based substantially on the platform of the Bradley Fighting Vehicle, which it will operate alongside in support of the ABCT's operations. Like the Bradley, the AMPV has a welded aluminum hull designed to keep vehicle weight down and allow for maximum mobility. According to Major General David Bassett, 60%-70% of the vehicle's parts are shared with existing ground combat vehicles, yielding compatibility efficiencies.

By posting a comment you confirm that you have read and accept our Posting Rules and Terms of Use.
Advertisement
RELATED ARTICLES
US Army goggles enable soldiers to see through vehicles, around corners
Video: Integration of hybrid electric drive into a combat vehicle under US Army contract
Prototype Combat Vehicle is Designed to Deliver Troops and Lethal Force to the Front
A Hybrid Unmanned Ground Vehicle Is Developed for the Army
Lidar to Boost Armored Vehicle Crews' Awareness
Advertisement