Scientists at the Johns Hopkins University have shown that a coating with antibiotic-releasing nanofibers has the potential to better prevent several serious bacterial infections related to total joint replacement surgery.

The study was conducted on rodents’ knee joints, but the researchers say the technology would have “broad applicability” in the use of orthopedic prostheses, such as hip and knee total joint replacements, as well pacemakers, stents and other implantable medical devices. In contrast to other coatings in development, the researchers report that the new material can release multiple antibiotics in a strategically timed way for optimal effect. 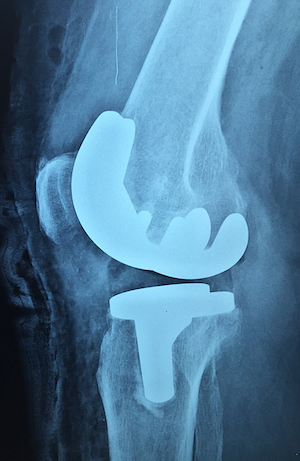 Researchers say the coating could be used to prevent infection in orthopedic prostheses, such as knee joint replacements. Image credit: Pixabay. “We can potentially coat any metallic implant that we put into patients, from prosthetic joints, rods, screws and plates to pacemakers, implantable defibrillators and dental hardware,” says Lloyd Miller, associate professor of dermatology and orthopedic surgery.

Each year in the U.S., an estimated 1%-2% of the more than 1 million hip and knee replacement surgeries are followed by infections linked to the formation of biofilms—layers of bacteria that adhere to a surface, forming a dense, impenetrable matrix of proteins, sugars and DNA. Immediately after surgery, an acute infection causes swelling and redness that can often be treated with intravenous antibiotics. But in some people, low-grade chronic infections can last for months, causing bone loss that leads to implant loosening and ultimately failure of the new prosthesis.

Major downsides to existing options for local antibiotic delivery during the implantation of medical devices—such as antibiotic-loaded cement, beads, spacers or powder—are that they can typically deliver only one antibiotic at a time and the release rate is not well controlled.

Over three years, the team focused on designing a thin, biodegradable plastic coating that could release multiple antibiotics at desired rates. The coating they developed is composed of a nanofiber mesh embedded in a thin film; both components are made of polymers used for degradable sutures.

To test its ability to prevent infection, the researchers loaded the nanofiber coating with the antibiotic rifampin together with one of three other antibiotics: vancomycin, daptomycin or linezolid. Rifampin has excellent anti-biofilm activity but cannot be used alone because bacteria would rapidly develop resistance. The coatings released vancomycin, daptomycin or linezolid for 7 to 14 days and rifampin over 3 to 5 days, and the researchers were able to deploy two antibiotics against potential infection while ensuring rifampin was never present as a single agent.

The team then used each combination to coat titanium Kirschner wires—a type of pin used in orthopedic surgery to fix bone in place after wrist fractures—inserted them into the knee joints of anesthetized mice and introduced a strain of Staphylococcus aureus, a bacterium that commonly causes biofilm-associated infections in orthopedic surgeries. After 14 days of infection in mice that received an antibiotic-free coating on the pins, all of the mice had abundant bacteria in the infected tissue around the knee joint, and 80% had bacteria on the surface of the implant.

In contrast, after the same time period in mice that received pins with either the linezolid-rifampin or daptomycin-rifampin coating, none had detectable bacteria either on the implants or in the surrounding tissue.

After the two-week test, each of the rodents’ joints and adjacent bones were removed for further study. Not only had infection been prevented, but the bone loss often seen near infected joints—which creates the prosthetic loosening in patients—had also been completely avoided in animals that received pins with the antibiotic-loaded coating.

The researchers emphasize that further study is needed to test the efficacy and safety of the coating in humans, and in sorting out which patients would best benefit from the coating.

By posting a comment you confirm that you have read and accept our Posting Rules and Terms of Use.
Advertisement
RELATED ARTICLES
Infection-resistant coating could prevent implant infections
Antibiotics are not the only factor in the spread of resistance
Video: Magnetic Fields Destroy Bacteria on Artificial Joints
Maple Syrup Extract Could Help Combat Superbugs, Canadian Researchers Say
Color-changing bandage signals infection and delivers drugs
Advertisement