Research led by the University of Plymouth, UK, has shown that some commonly used human and veterinary medications are not being absorbed by riverine bacteria. Many medicines of similar type, excreted into surface waters directly or via treated and untreated wastewaters and biosolids, may remain intact for a considerable time, maintaining their potential to negatively impact aquatic life, the scientists suggest.

The study investigated the persistence of four widely used cationic pharmaceuticals included in the World Health Organization List of Essential Medicines. They included the anti-malarial drugs chloroquine and quinine, the anti-psychosis drug fluphenazine and an anti-worming agent, 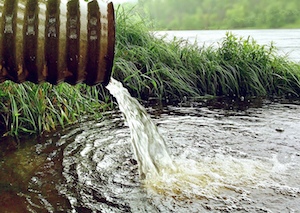 Medicines transported to rivers via treated and untreated wastewaters may remain intact for a considerable time. Image credit: Pixabay.Over the course of 21 days, riverine bacteria contained in water collected from the River Tamar, in southwest England, were exposed to each of the four pharmaceuticals, with the concentrations measured at the beginning and end of the period. Levamisole was the only drug to be taken up by bacteria (with up to 19% removal), while the concentrations of quinine, chloroquine and fluphenazine were unaffected.

"Recent research has suggested that the behavior of freshwater fish can be altered by current measured levels of pharmaceuticals," says Dr. Mark Fitzsimons, associate professor in organic geochemistry. "This study shows that improved predictive power, with respect to modeling bioaccumulation, may be needed to robustly assess the environmental risks of pharmaceuticals in aquatic environments.”

Although studies of pharmaceuticals in surface waters of high-income countries have been carried out for several decades, there remains little systematic understanding of their transport, fate and impact, notes research fellow Dr. Alan Tappin. Lower-income countries, where medicinal use is forecast to increase significantly in the future, represent an even larger concern with regard to the potential for contamination of aquatic systems, he adds.

By posting a comment you confirm that you have read and accept our Posting Rules and Terms of Use.
Advertisement
RELATED ARTICLES
Study Highlights How Drug Pollution Passes through Food Web, Beginning with Aquatic Insects
Concentrations of 29 Different Pharmaceuticals Found in York Rivers
Rivers All Around the World Coursing with Pharma Waste
Technique 3D prints pharmaceuticals on demand
Baker's Yeast is the New Penicillin
Advertisement