Beaver-Like Wetsuits in the Works

Beavers and sea otters lack the thick layer of blubber that insulates walruses and whales. Yet they can keep warm and dry while diving by trapping pockets of air in dense layers of fur.

Inspired by these fuzzy swimmers, MIT engineers have now fabricated fur-like, rubbery pelts and used them to identify the mechanism by which air is trapped between individual hairs when the pelts are plunged into liquid. Their findings may serve as a guide for designing bioinspired materials—most notably, warm, furry wetsuits. 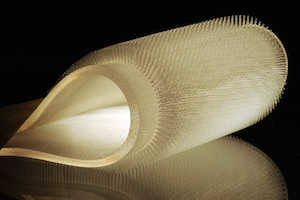 The research findings could serve as a guide for designing bioinspired materials, such as warm, furry wetsuits. Image credit: Felice Frankel.Biologists had previously observed that these semiaquatic mammals trap air in their fur. The fur itself is of two types: long, thin “guard” hairs that act as a shield for shorter, denser “underfur.” While it has been assumed that the guard hairs keep water from penetrating the underfur, thereby trapping warm air against the animals’ skin, there has been no mechanical understanding of that process.

An MIT team led by Anette (Peko) Hosoi, professor of mechanical engineering, set out to fabricate precise, fur-like surfaces of various dimensions, plunge the surfaces in liquid at varying speeds and, with video imaging, measure the air that is trapped in the fur during each dive.

To make hairy surfaces, graduate student Alice Nasto first created molds by laser cutting thousands of tiny holes in small acrylic blocks. With each mold, she used a software program to alter the size and spacing of individual hairs. She then filled the molds with polydimethylsiloxane and pulled the hairy surfaces out of the mold after curing.

The researchers mounted each hairy surface to a vertical, motorized stage with the hairs facing outward and then submerged the surfaces in silicone oil—to enhance observation of air pockets forming. As each surface dove down, the researchers could see within the hairs a clear boundary between liquid and air, with air forming a thicker layer in hairs closer to the surface and progressively thinning out with depth. Among the various surfaces, they found that those with denser fur that were plunged at higher speeds generally retained a thicker layer of air within their hairs.

From these experiments, it appeared that the spacing of individual hairs, and the speed at which they were plunged, played a large role in determining how much air a surface could trap. Hosoi and Nasto then developed a model to describe this air-trapping effect in mathematical terms. To do this, they modeled the hair surfaces as a series of tubes to represent the spaces between individual hairs. They then modeled the flow of liquid within each tube and measured the pressure balance between the resulting liquid and air layers.

Hosoi and Nasto applied their equation to the experimental data and found their predictions matched the data precisely. The researchers can now accurately predict how thick an air layer will surround a hairy surface, based on their equation.

In addition to informing new wetsuit designs, the work could have applications in industrial dip coating, by which surfaces are immersed in a polymer to achieve an even, protective coating. Many such treatments involve dipping an object in a liquid bath—in which case it is not desirable for air to remain trapped. This model tells how fast one may dip before trapping air.

By posting a comment you confirm that you have read and accept our Posting Rules and Terms of Use.
Advertisement
RELATED ARTICLES
Study: Dog fur, human hair can soak up oil spills
Blubber-Inspired Wetsuit Coating Allows Divers to Last in Frigid Water for Two to Three Hours
Plastic Microfibers Found in the Stool Samples of Wild Animals
Artificial Hair Sensors Could Enable “Fly by Feel”
A New Method to Better Separate Oil and Water in Oil Spills
Advertisement