California-based Liquid Robotics has partnered with the Centre for Environment, Fisheries and Aquaculture Science (CEFAS), UK, to deploy, test and recover a remotely piloted Wave Glider, which allows scientists to measure water characteristics and selectively collect samples in near real time.

The unmanned surface vehicle (USV) Lyra was deployed in the southern North Sea about 60 km off Lincolnshire and spent 48 days at sea before being recovered 20 miles off Lowestoft. While deployed, the remotely piloted vessel covered over 2,700 km at sea collecting samples, on demand, by receiving commands over the Iridium satellite network. 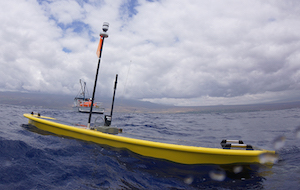 While deployed, Lyra covered over 2,700 km at sea collecting samples, on demand, by receiving commands over the Iridium satellite network. Image credit: Liquid Robotics.Sampling helps scientists assess the health of the oceans. For example, harmful algal blooms can lead to fish mortality events and cause toxicity in shellfish species that, if consumed, can be dangerous to human health.

Using daily satellite images of a harmful algal bloom, CEFAS scientists navigated Lyra to a small suspected bloom of the phytoplankton Karenia sp. north of the Dogger Bank. Once in the area of the bloom, scientists monitored the near-real-time data from the onboard chlorophyll sensor to confirm its presence. They then commanded the onboard water sampler to take two samples that have since been confirmed to contain Karenia sp.

The area in which the vessel operated was extremely challenging for a USV. During the trip, Lyra picked up transmissions of more than 350 ships and steered through many of the southern North Sea gas fields/platforms. The vessel also had to navigate around many shallow sandbanks in the southern North Sea and cope with strong tidal currents off East Anglia on its way back to Lowestoft.

By posting a comment you confirm that you have read and accept our Posting Rules and Terms of Use.
Advertisement
RELATED ARTICLES
Lake bacteria tapped to neutralize algal bloom toxin in drinking water
Toxins from Algae Found in San Francisco Bay Shellfish
Watch the Launch of the World’s Largest Diamond Exploration Ship
"Saildrones" to Capture Oceanographic Data in Bering Sea
As Arctic Ice Recedes, a New Sea Route May Open
Advertisement