The relatively recent development of enhanced techniques to recover natural gas and crude oil from shale deposits has, in the short-term, transformed the energy industry in the U.S.

However, these developments are unlikely to be sustainable. Humans have already consumed a vast quantity of oil in 150 years, and consumption of natural gas continues at a rapid pace. Couple this with increasing concern over carbon dioxide emissions and global climate change, and it is easy to see why the popularity of non-fossil sources of energy endures.

But even with wind, solar, and other sources, a need exists for the organic precursors for liquid fuels and for chemical/petrochemical production. Although the biofuels/biochemicals industries have moved ahead in fits and starts, important research continues in this field.

A number of institutions and universities around the country have led these research efforts, among them Iowa State University. That may only be natural given the university’s location in one of the richest agricultural areas of the world. After a look at some biomass basics, this article examines an example of research at ISU regarding biofuels/biochemicals production methods.

The study of carbon chemistry (known as organic chemistry) is rewarding because of carbon’s unique ability to bond with itself and other elements to form literally millions of compounds. No other element has properties even remotely close to carbon. Those carbon compounds (with hydrogen as the primary second element) are, of course, the “hydrocarbons.”

The principal component of natural gas is the most fundamental hydrocarbon, methane (CH4). But crude oil typically contains hundreds of hydrocarbons of varying chain lengths and even a few of a cyclic nature. These compounds can be cracked, reformed, and otherwise restructured to produce gasoline, aviation fuels, and the precursors for plastics, among other things.. However, the extraction, transport, treatment, and, especially, the combustion of hydrocarbons release greenhouse gases to the atmosphere and alter the natural carbon cycle. 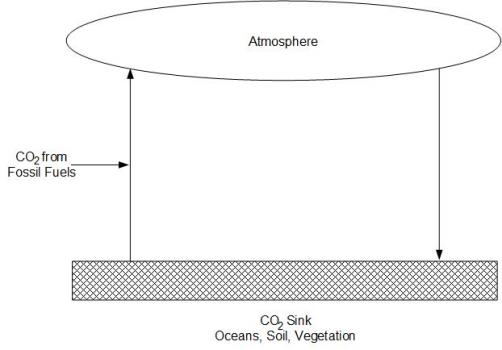 Schematic showing basic external CO2 production on the natural cycle.So, the long-term lack of raw material sustainability, and the now widely accepted influence of fossil-fuel use on the environment, are the two primary factors that keep the biofuels and biochemicals industries moving forward, even if in somewhat of an unsteady mode.

But, what is it that keeps the technologies from advancing faster? A number of technical and economic reasons exist. As a starting point, humans have been producing one particular bio-“fuel” for thousands of years. It is, of course, ethanol, and until somewhat recently was almost exclusively used for a single purpose: alcohol for consumption. Grains like corn are primarily made up of the carbohydrate starch, which consists of polymeric linkages of the simple sugar glucose.

Yeast can readily break down and ferment these sugars, and other microorganisms are available that produce alternative chemicals such as butanol. These intermediate products can then be converted into a number of more advanced intermediates or final materials. But, a primary issue with regard to starch fermentation is that it consumes potential food for livestock and humans. Much discussion has occurred over this “food-for-fuel” issue, and is one reason why many researchers have focused on what are known as second- and third-generation processes that use non-food plants and woody material as the starting product. The principal component of vegetation is cellulose, along with lignin and other organic compounds.

The basic structure of cellulose showing individual glucose monomers with oxygen linkages.Cellulose is chemically equivalent to starch, but has a different geometrical conformation that essentially makes it impervious to the linkage breaking that microorganisms easily can accomplish on starch. Generating simple sugars from cellulose for subsequent biofuel and biochemical production requires a pretreatment step. The three most prominent so far have been heat, acid, and enzymes.

But each of these methods adds expense either by direct energy requirements or extra efforts to produce the chemicals for pretreatment. And, the lignin (a complex organic compound) component of vegetation complicates this chemistry. All of these factors add cost to the final product.

However, researchers continue to make advancements not only in improving the chemistry of cellulose conversion but also in producing side products that have value. As the first illustration in this article suggests, reducing the external input of CO2 to the carbon cycle moves the environment to a more carbon neutral state.

Work at Iowa State’s Bioeconomy Institute has demonstrated potential methods to enhance biomass-to-fuels/chemicals processes. One development in particular has reached pilot scale at the university and stems from research over the last several years into fast pyrolysis of biomass.

Evident is that a small percentage of biomass combustion serves as the major energy source for pyrolysis and thus makes the process more self-sustaining.

We will now examine the products from fast pyrolysis, as these are critical for establishing its potential as a full-scale technology. 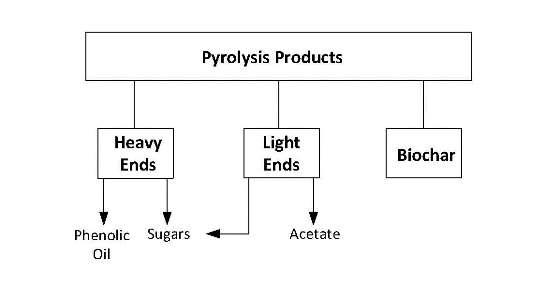 Pyrolysis products. Adapted from Reference 1.The liquid-heavy ends and light ends can be converted into a variety of final products, including transportation fuels, chemical intermediates, and even solid carbon materials. So, given the billions of tons of non-food biomass that is potentially available, the technology offers a possible method to generate large volumes of liquid fuels and chemicals. But, the biochar component has some interesting properties of its own.

First, use the table (below) to consider the makeup of what has been branded as Lignocol as compared with some typical coals from around the U.S. Other typical properties of the Lignocol include, fixed carbon of 33.4% and volatile content of 65.4%. 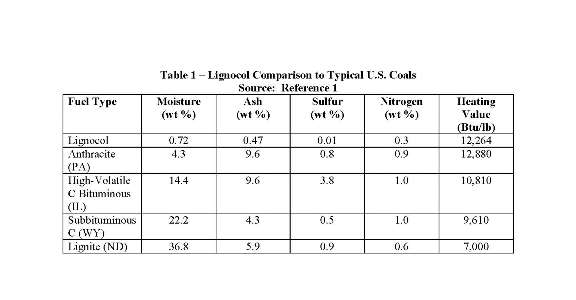 Click to see an enlarged version of the table.Researchers suggest (and this author, who spent many years at two coal-fired power plants agrees) that this material could serve as a carbon neutral replacement for traditional coal, but with much lower concentrations of impurities, most notably sulfur. However, another potential application of biochar could be much more acceptable. The solid carbon product is an excellent soil enhancer. Applying the material to marginal lands could increase the ability of these soils to produce additional biomass and possibly food crops. This in turn would increase the CO2 sequestration capability of the land.

In fact, according to information from at least one source, of the carbon dioxide that is sequestered on land, 81% accumulates in soil, with the remaining 19% in vegetation [1]. Thus, improving soil health could go a long way towards carbon neutrality.

This discussion describes a process in which almost all of the raw biomass is converted to useful products, some of which offer the potential to synergistically improve raw biomass production and CO2 sequestration. Of course, a number of logistical issues must be considered in moving this technology to full scale, including land management, raw material harvesting, water requirements, product transport, and others. But many of these issues are already being addressed with more traditional biofuels/chemicals production methods. To readers interested in all of the technologies currently in progress, the author recommends this web site.

By posting a comment you confirm that you have read and accept our Posting Rules and Terms of Use.
Advertisement
RELATED ARTICLES
Biotech Breakthrough? Sunlight Produces Chemicals, Fuels
New method to produce cheaper biofuels from biomass waste
EU Biochemical Production Fueled by Wheat and Wood Waste
Method Could Expand Biomass Waste Use for Chemical Feedstock
Biomass for Energy: Yes or No?
Advertisement