A natural process that uses sunlight could both speed up and green up the production of chemicals and biofuels.

The process is described as reverse photosynthesis and was uncovered by researchers at the University of Copenhagen. Photosynthesis is a process used by plants and other matter to harness energy from sunlight. The recently discovered process employs the sun’s rays to break down plant matter. 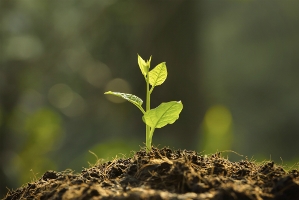 In a process termed reverse photosynthesis, sunlight is collected by chlorophyll and, combined with natural enzymes called monooxygenases, quickly breaks down plant biomass for use as chemicals, biofuels or other products. Image source: University of CopenhagenThe process incorporates the same molecule used in photosynthesis, chlorophyll, but adds a specific enzyme that uses sunlight to dismantle the biomass into components to produce biofuels and other products.

Danish researchers are calling the discovery a game changer that could transform the industrial production of fuels and chemicals by providing a production method without needing additional energy inputs.

In reverse photosynthesis, as the researchers describe, biomass such as straw or wood is combined with a monooxygenase, which is found in certain bacteria and fungi. By adding chlorophyll and exposing the mixture to sunlight, sugar molecules found in the biomass are broken down into smaller components naturally. The biochemicals that result can then be converted into fuel or plastics through a process that’s far faster, more energy efficient and done at lower temperatures than current methods.

For example, the process might be used to convert bio-sourced methane into methanol, a liquid fuel. Methanol is attractive as a raw material because it can be used by the petrochemical industry and processed into fuels, materials and chemicals.

By posting a comment you confirm that you have read and accept our Posting Rules and Terms of Use.
Advertisement
RELATED ARTICLES
How Algae and Moss Protect from Too Much Sunlight
The road to artificial photosynthesis
Better Biofuels and Bioproducts from Photosynthesis?
Satellites Used to Track Photosynthesis
Light-Harvesting Gel Could Double Solar Panel Efficiency
Advertisement