A Rice University laboratory has improved its method to turn plain asphalt into a porous material that can capture greenhouse gases from natural gas. The researchers report that a new form of the material can sequester 154% of its weight in carbon dioxide at high pressures that are common at gas wellheads.

Initial field tests in 2015 found that pressure at the wellhead made it possible for the asphalt material to adsorb, or soak up, 114% of its weight in carbon at ambient temperatures. 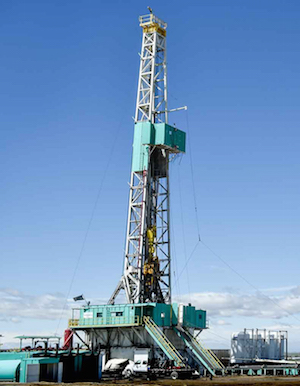 “It’s a big energy sink,” says Rice chemist James Tour, whose lab developed a technique last year to turn asphalt into a tough, sponge-like substance that could be used in place of amines to remove carbon dioxide from natural gas as it is pumped from ocean wellheads.

Tour says the new asphalt sorbent is made in two steps from a less expensive form of asphalt, which makes it more practical for industry.

The lab heated a common type of asphalt known as gilsonite at ambient pressure to eliminate unneeded organic molecules, then heated it again in the presence of potassium hydroxide for about 20 minutes to synthesize oxygen-enhanced porous carbon with a surface area of 4,200 square meters per gram, much higher than that of the previous material.

The Rice lab’s initial asphalt-based porous carbon collected CO2 from gas streams under pressure at the wellhead and released it when the pressure was released. The carbon dioxide could then be repurposed or pumped back underground, while the porous carbon could be reused immediately.

In the latest tests with its new material, Tour's group showed its new sorbent could remove carbon dioxide at 54 bar pressure. One bar is roughly equal to atmospheric pressure at sea level, and the 54 bar measure in the latest experiments is characteristic of the pressure levels typically found at natural gas wellheads, Tour says.

By posting a comment you confirm that you have read and accept our Posting Rules and Terms of Use.
Advertisement
RELATED ARTICLES
Water Boosts Asphalt-based Carbon Capture at the Wellhead
High-Capacity Asphalt–Lithium Batteries Charge in Five Minutes
Microwaved Nanoribbons May Bolster Oil and Gas Wells
Researchers turn trash into graphene
Going Beyond the Surface of Asphalt Pavement
Advertisement