The Office of Naval Research (ONR) is sponsoring Battelle’s development of a medical wrap that is designed to mitigate damage and protect tissue, which will be called the Acute Care Cover for the Severely Injured Limb (ACCSIL).

The moments after a traumatic limb injury resulting from an explosive blast are critical. Blood is lost, tissue begins to dry and deteriorate and dirt and harmful bacteria may enter the wound—increasing the risk of infection, limb loss or even death. 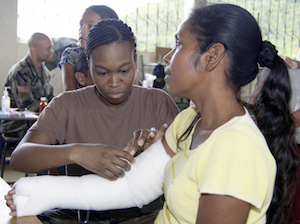 ACCSIL is expected to be a useful treatment in both military and civilian settings. Image credit: U.S. Army/Kaye Richey. "ACCSIL will be carried by corpsmen and medics, administered at the point of injury on the battlefield and used in conjunction with a tourniquet," says Dr. Tim Bentley, program manager in ONR's Warfighter Performance Department, who is overseeing the research. "It will be lightweight, keep the wound fresh and maintain tissue condition for up to 72 hours—which is particularly important as we plan for future scenarios where prolonged field care will be required."

According to ONR, the wrap will comprise two primary parts: (1) an outer cover that will conform to the shape of the injured limb, stop blood loss, retain body heat and block out dirt and (2) a "bioactive" inner layer coated with specially designed chemical compounds to release antibiotics and pain medication, keep tissue moist and prevent bacterial and fungal growth.

"Current bandages aren't very good at keeping out bacteria, so a lot of medics improvise by using plastic wrap and lots of tape, which is actually really good at keeping the wound moist but not protecting or preserving tissue," says Kelly Jenkins, director of advanced materials for Battelle's Consumer, Industrial and Medical business unit. "ACCSIL will function much better."

Jenkins says ACCSIL's ability to preserve tissue for up to 72 hours will be the wrap's most valuable function, especially in remote combat zones, where it might take several days to transport injured personnel to a military hospital.

"The goal with this wrap is not healing, but preservation," Jenkins says. "We want to try to stop time, to keep the wound as fresh as when it first happened and give surgeons up to 72 hours to start treatment. Even if ACCSIL can't save the whole limb, we want to save enough of the limb to give the patient a good quality of life they might not otherwise have had in such a situation."

ONR says that ACCSIL's use could potentially go beyond the battlefield to industrial settings aboard ships or submarines, where sailors and marines risk crushed limbs from steel plates or hatches, and burns from ruptured steam lines. The wrap also could be potentially useful in civilian scenarios such as terrorist attacks and farming or automobile accidents.

Development work on the ACCSIL wrap will be demonstrated within the next two years, ONR says.

By posting a comment you confirm that you have read and accept our Posting Rules and Terms of Use.
Advertisement
RELATED ARTICLES
Device May Help Combat Medics Save Lives
New smart bandage monitors as it heals
New wound-dressing film promises to heal
Purdue engineers develop microneedle array for treating diabetic foot ulcers
Injectable Bandage Stops Bleeding and Speeds Healing
Advertisement