A Stanford University team has developed technology that reads brain signals to drive a cursor moving over a keyboard. Monkeys trained to copy text using the technology were able to type at a rate of up to 12 words per minute.

Earlier versions of the technology have already been tested successfully in people with paralysis, but the typing was slow and imprecise. This latest work tests improvements to the speed and accuracy of the technology that interprets brain signals and drives the cursor. 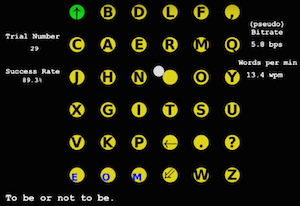 Monkeys testing the technology were trained to type letters corresponding to what they saw on a screen. Image credit: Stanford University. Other approaches for helping people with movement disabilities to type involve tracking eye movements or, as in the case of Stephen Hawking, tracking movements of individual muscles in the face. However, these have limitations and can require a degree of muscle control that might be difficult for some people. For example, Hawking wasn’t able to use eye-tracking software due to drooping eyelids.

The technology developed by the Stanford team involves a multi-electrode array implanted in the brain to directly read signals from a region that ordinarily directs hand and arm movements used to move a computer mouse.

“The interface we tested is exactly what a human would use,” Nuyujukian says. “What we had never quantified before was the typing rate that could be achieved.” Using new high-performing algorithms developed by Nuyujukian and his colleagues, the monkeys could type more than three times faster than with earlier approaches.

The monkeys testing the technology had been trained to type letters corresponding to what they see on a screen. For this study, the animals transcribed passages of New York Times articles or, in one example, Hamlet.

In addition to proving the technology, the researchers say the study shows that the implanted sensor could be stable for several years. The implants used to test this and previous iterations of the technology were embedded for up to four years prior to this experiment, with no loss of performance or side-effects to the animals.

Shenoy and Nuyujukian are part of the Brain-Machine Interface initiative of the Stanford Neurosciences Institute, which is working to develop this and other methods of interfacing technology directly with the brain. The team is currently running a clinical trial, in conjunction with Jaimie Henderson, professor of neurosurgery, to test this latest interface in people.

If the group is successful, technologies for directly interpreting brain signals could create a new way for people with paralysis to communicate with others.