In the push to increase the renewable share of power generation and to lower the cost of each megawatt-hour produced, taller wind turbine towers and longer blades are key, and three recent announcements indicate the trend is likely to continue, especially in offshore deployments.

Denmark’s Dong Energy has installed a structure in the Irish Sea measuring 195 meters tall with a rotor diameter of 164 meters and a generating capacity of 8 megawatts (MW). Meanwhile, Siemens reported that it had upped the top capacity of its offshore turbines to 8.0 MW. And LM Wind Power reported an 88.4m-long blade, also developed for 8 MW capacity turbines. 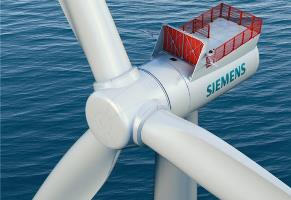 A direct drive 8.0 MW wind turbine from Siemens will be installed in 2017.The Siemens turbine uses new magnet technology, enabling a rated power increase of more than 14% over its 7 MW predecessor, the company says.

According to Siemens, turbine capacity has increased 15 times in the quarter century since the first offshore wind farms began operating.

“Using larger turbines is a critical part of the industry’s drive in getting costs down,” says Dong Energy’s Benj Sykes. “Each turbine needs foundations, cables to an onshore substation, and maintenance, so the more megawatts you can generate from each turbine, the lower the overall cost per megawatt.”

LM Wind Power’s CEO Marc de Jong says that engineers from his company and turbine maker Adwen designed and integrated a blade that lowers the levelized cost of energy for wind power.

Dong Energy says it plans to bring costs of offshore wind power down to 100 euros ($112.48) per megawatt hour by 2020. Its Burbo Bank project in the Irish Sea has secured a minimum 15-year contract price for generated electricity of around $200 per megawatthour. It is also among several offshore wind power installations that will help the UK add around 10 gigawatts of generating capacity by the end of the decade.