A research team in from Aix-Marseille University in France has immobilized a microbubble underwater. The accomplishment seems to contradict Archimedes’ principle on the buoyancy of force that would normally push it to the surface. The researchers' find could have application in medicine, the nuclear industry, or micromanipulation technology. 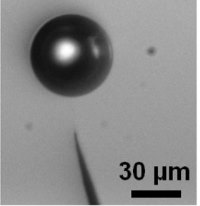 Microbubble immobilized in solution above the apex of the nanoelectrode. Image source: CINaM-CNRS Aix-Marseille UniversityBubbles are common in nature, but it is not easy to control their diameter, position, or time of formation. Previous work by the French research team explored how to control hydrogen and oxygen gas bubbles that are formed by the breakdown of water using electricity. They showed that if one of the electrodes is tip-shaped—with a curvature radius at its apex ranging from 1 nanometer to 1 micrometer—and an alternating electric current with deﬁnite values of amplitude and frequency was used, microbubbles could be produced at a single point at the apex of the nanoelectrode.

In their most recent work, the team produced a microbubble (at the apex of the nanoelectrode) then immobilized it by rapidly increasing the frequency of the electric current. They found that no matter which direction the electrode was moved, the bubble remained above and at the same distance from the electrode.

Juan Olives, a member of the research team, says that the greatest surprise in the findings was that, although nothing appears to be moving during the experiment, all is moving in an apparent steady state. Hydrogen and oxygen molecules are continually produced at the apex of the nanoelectrode; they move in the solution and in the bubble; they enter and leave the bubble; and there is a convection velocity in the solution and in the bubble. Everything moves except the surface of the bubble, he says.

By posting a comment you confirm that you have read and accept our Posting Rules and Terms of Use.
Advertisement
RELATED ARTICLES
Watch How Microbubbles Bust Biofilms
Liquid Volumetric Displays of 3-D Images
There's science behind that pint of Guinness
'Micro-subs' precisely deliver drugs throughout the human body
Video: Learn How Bubbles Form Inside a Lithium-air Battery
Advertisement