A Battery You Can Safely Swallow

A non-toxic, biodegradable battery to power ingestible medical devices has been developed at Carnegie Mellon University. Researchers relied on melanin pigments, compounds naturally occurring in skin, hair and eyes, instead of the more toxic components found in batteries that supply pacemakers and other implantables. 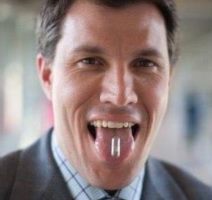 Christopher Bettinger is developing an edible battery made with melanin. Image source: ACSThe battery is designed for low-power, repeat applications such as drug-delivery devices that are meant to be swallowed and then excreted. According to Christopher Bettinger, Ph.D., “An ingestible, degradable device is in the body for no longer than 20 hours or so. Even if you have marginal performance, which we do, that’s all you need.”

Since melanin has a high affinity for metal ions, it works well as either an anode or cathode. The researchers also tested manganese oxide and sodium titanium as electrode materials, and copper and iron cations, which the body uses for normal functioning,

The capacity is low relative to lithium-ion – a 5 milli-Watt device can be powered for 18 hours using 600 mg of melanin as a cathode – but still sufficient to power an ingestible drug-delivery device or sensor. Applications envisioned include using the battery for sensing gut microbiome changes and responding with a release of medicine, or for delivering bursts of a vaccine over several hours before degrading. The batteries are currently used to analyze the structure and chemistry of the melanin pigments themselves to better understand how they work.

The Carnegie Mellon team is also experimenting with pectin, a compound from plants used as a gelling agent in jams and jellies, as an edible battery ingredient. The next goal is to develop packaging materials to safely deliver the battery to the stomach.

The research was presented at the National Meeting & Exposition of the American Chemical Society in Philadelphia, Penn., (see video).