Hydrogel That Doesn't Dry Out Could Be Used for Artificial Skin

Massachusetts Institute of Technology (MIT) engineers have found a way to prevent hydrogels from dehydrating with a technique that could lead to longer-lasting contact lenses, stretchy microfluidic devices, flexible bioelectronics and even artificial skin.

The engineers, led by Xuanhe Zhao, associate professor in MIT’s Department of Mechanical Engineering, devised a method to robustly bind hydrogels to elastic polymers such as rubber and silicone that are stretchy like hydrogels yet impervious to water. They found that coating hydrogels with a thin elastomer layer provided a water-trapping barrier that keeps the hydrogel moist and flexible. 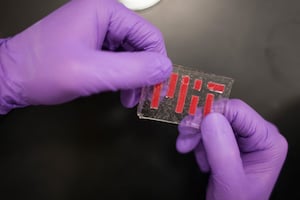 Coating hydrogels with a thin elastomer layer provides a water-trapping barrier that keeps the hydrogel moist and flexible. Image credit: Melanie Gonick/MIT. Zhao says the group took inspiration for its design from human skin, which is composed of an outer epidermis layer bonded to an underlying dermis layer. The epidermis acts as a shield, protecting the dermis and its network of nerves and capillaries, as well as the rest of the body’s muscles and organs, from drying out.

In December 2015, Zhao’s team developed a technique to achieve robust bonding of hydrogels to solid surfaces such as metal, ceramic and glass. They used the technique to embed electronic sensors within hydrogels to create a “smart” bandage. However, they found that the hydrogel would eventually dry out, losing its flexibility.

Inspired by skin, the researchers reasoned that coating hydrogels with a material that is similarly stretchy but also water resistant would be a suitable strategy for preventing dehydration. They soon landed on elastomers as the ideal coating, though the rubbery material came with one major challenge: it is inherently resistant to bonding with hydrogels.

After searching through the literature on chemical bonding agents, the researchers found a candidate compound to bring hydrogels and elastomers together—benzophenone—which is activated via ultraviolet (UV) light.

After dipping a thin sheet of elastomer into a solution of benzophenone, the researchers wrapped the treated elastomer around a sheet of hydrogel and exposed the hybrid to UV light. They found that after 48 hours in a dry laboratory environment, the weight of the hybrid material did not change, indicating that the hydrogel retained most of its moisture. They also measured the force required to peel the two materials apart and found that to separate them required 1,000 joules per square meter—much higher than the force needed to peel the skin’s epidermis from the dermis.

“We can also stretch the material to seven times its original length, and the bond still holds," Zhao says.

The team then etched tiny channels within the hydrogel-elastomer hybrid to simulate a simple network of blood vessels. They first cured a common elastomer onto a silicon wafer mold with a three-channel pattern, etching the pattern onto the elastomer using soft lithography. They then dipped the patterned elastomer in benzophenone, laid a sheet of hydrogel over the elastomer and exposed both layers to UV light. In experiments, the researchers were able to flow red, blue and green food coloring through each channel in the hybrid material.

In the future, the hybrid-elastomer material may be used as a stretchy microfluidic bandage to deliver drugs directly through the skin, says MIT graduate student Hyunwoo Yuk.

The researchers also explored the hybrid material’s potential as a complex ionic circuit. A neural network is such a circuit; nerves in the skin send ions back and forth to signal sensations such as heat and pain. Zhao says hydrogels, being mostly composed of water, are natural conductors through which ions can flow. The addition of an elastomer layer acts as an insulator, preventing ions from escaping—an essential combination for any circuit.

To make it conductive to ions, the researchers submerged the hybrid material in a concentrated solution of sodium chloride, then connected the material to an LED light. By placing electrodes at either end of the material, they were able to generate an ionic current that switched on the light.

Next, the group hopes to further test the hybrid material’s potential in a number of applications, including wearable electronics and on-demand drug-delivering bandages, as well as nondrying, circuit-embedded contact lenses.