A Cheaper Way to Produce Hydrogen from Water?

Researchers at Sweden's KTH Royal Institute of Technology claim to have opened a route to large-scale hydrogen production by discovering a method for splitting water without relying on precious metals.

Professor Licheng Sun, of the School of Chemical Science and Engineering, had earlier developed molecular catalysts for water oxidation with an efficiency approaching that of natural photosynthesis. Now, his team has discovered that a new material composed of common earth-abundant elements could be used as a catalyst for water splitting, helping change the economics of large-scale hydrogen fuel production. 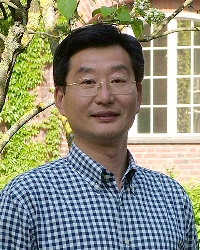 KTH Professor Licheng Sun has discovered that a new material composed of common earth-abundant elements could be used as a catalyst for water splitting. Image credit: KTH.The new material is a monolayered double hydroxide involving nickel and vanadium that offers an electrocatalyst for water oxidation. The monolayer feature not only increases the active surface area, but also enhances the electron transfer within the material, says researcher Hong Chen.

"This is the first time that the metal vanadium has been used to dope nickel hydroxide to form a water oxidation catalyst, and it works very well—even beyond our expectations," says researcher Ke Fan. "No doubt, this material can greatly expand the scope of non-precious metal elements of electrocatalysts, and it opens new areas for water splitting."

Sun says he expects the research to pave the way for new low-cost water oxidation catalysts with stability and efficiencies that can equal or even surpass some of today’s best catalysts, including RuO2 and IrO2.

By posting a comment you confirm that you have read and accept our Posting Rules and Terms of Use.
Advertisement
RELATED ARTICLES
Efficient Water Splitting with Nickel Selenide Catalyst?
Nanofoam Catalysts Could Make Hydrogen Energy Viable for Large Applications
Efficient, Low-Cost Catalyst for Water Splitting
A Low-Cost and Efficient Water-Splitting Electrode
Safer Methods for Hydrogen Production
Advertisement