Engineers are testing a six-story building on the world’s largest outdoor seismic shake table at the University of California San Diego (UCSD) to better understand how cold-formed steel structures withstand earthquakes and the fires that may follow. It is the tallest such structure ever to undergo tests on a shake table.

The engineers, led by UCSD professors Tara Hutchinson and Gil Hegemier, from the Center for Extreme Events Research at the Jacobs School of Engineering, are putting the building through a series of increasingly intense earthquake simulations (see video of an early test here). Then, researchers from Worcester Polytechnic Institute will test the building’s performance during a live fire. During both series of tests, UCSD researchers will fly small drones to map the structure and assess damage. 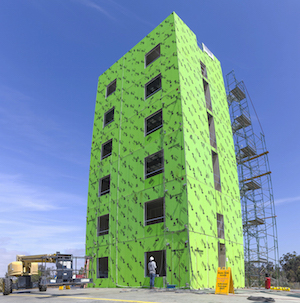 This is the tallest cold-formed, steel-frame structure ever to undergo tests on a shake table. Image credit: UCSD Jacobs School of Engineering. Researchers have installed more than 250 sensors, over 40 video cameras and a GPS system to gather data during the tests. “What we are doing is the equivalent of giving the building an EKG to see how it performs after an earthquake and a post-earthquake fire,” says Hutchinson.

Hutchinson and her team want to see how a six-story building made from lightweight steel performs during and after a temblor. She and colleagues believe it will fare well, in part because it is lighter than a concrete building of the same height and as a result has less mass to generate damaging forces.

During the seismic testing, the building will undergo a series of temblors of increasing intensity. Simulations will include replication of the forces felt during the 6.7-magnitude 1994 Northridge earthquake; the 7.2-magnitude 1992 Cape Mendocino earthquake; and the 8.8-magnitude 2010 earthquake that took place in Maule, Chile.

During the live fire tests that will take place after seismic testing, researchers will ignite pans of heptane, a liquid fuel, in eight rooms on the building’s second and sixth floors to achieve temperatures as high as 1,000 degrees Celsius within the seismically damaged rooms. Using temperature probes and video cameras, the researchers will assess how damage from the simulated earthquakes affects the ability of the passive fire protection systems to contain fires and prevent the spread of smoke.

Unmanned aerial vehicles (UAVs) will be deployed during both the seismic and fire testing to create a 3D model and video of observed damage. Data from the fire tests will allow the researchers to capture the thermal profile of the building. This effort aims to determine whether drones equipped with heat-detection cameras could be used to find survivors and assess damage after earthquakes and the fires that often follow them.

At the end of the testing, the building will be subjected to a simulated earthquake that is stronger than what the structure was designed to withstand in an effort to better understand how it might fail and to validate computer models of structural response that can be used to predict performance during different earthquakes.

By posting a comment you confirm that you have read and accept our Posting Rules and Terms of Use.
Advertisement
RELATED ARTICLES
Researchers Turn to Horizontal Forces in Earthquake-proof Design
Brick Improves Seismic Wave Absorption in Buildings
Watch: Using a Shake Table to Test "Plyscraper" Concepts
Predicting earthquake damage on bridge structures
Preventing oil and gas activity induced earthquakes
Advertisement