Exposure to high concentrations of plastic particles inhibits hatching, decreases growth rates and alters feeding preferences of European perch larvae, according to a new study published in the journal Science. It also prevents the perch from responding to predatory cues.

"Our results demonstrate that microplastic particles not only affect an animal's physiology, but also its natural behaviors, such as feeding choices, activity rates and predator avoidance strategies," says study co-author Oona M. Lönnstedt, a postdoctoral research fellow in the Department of Ecology and Genetics at Uppsala University, in Sweden. 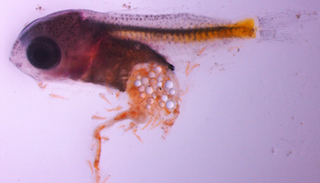 A damselfish larva after it has ingested microplastic particles. Image credit: Oona Lönnstedt.Because of the massive use of plastics in modern society, waste is accumulating in large quantities, often ending up in waterways. Much of this debris is in the form of microplastics—plastic fragments less than five millimeters in all dimensions that either break down from larger pieces of debris or are manufactured that way (such as the tiny beads in face wash products).

But while hundreds of studies have demonstrated global microplastic contamination, few have investigated its impacts on animal populations, communities and ecosystems. The mechanisms by which microplastics impact eggs, embryos and larvae of aquatic organisms, which are particularly vulnerable to water-borne pollutants, are especially murky.

To provide greater insight into this issue, Lönnstedt and fellow Uppsala University researcher Peter Eklöv collected European perch embryos and larvae from the Baltic Sea. In lab aquaria, they exposed these specimens to varying concentrations of polystyrene microplastics, including very high concentrations comparable to those found in parts of the ocean.

The biggest surprise in observing the fish, Lönnstedt says, was the fact that they preferentially ate microplastic particles. "I remember looking at them under the microscope and just seeing so many little plastic pieces in their stomachs, for fish after fish. It was terrifying."

Among other results, she and Eklöv observed that exposure of embryos to microplastics decreased hatching success by about 15%. What's more, exposed two-week-old larvae were much less able to escape predation when exposed to predator fish in the same tank, leading to reduced survival rates. Finally, fish reared in the highest microplastic concentrations were significantly smaller than fish reared in average concentrations.

Moreover, the results with the European perch translate to other fish types, Lönnstedt says.

"Since this study, I have done similar experiments with other species of fish, both tropical [damselfish] and temperate [pike and flounder], and all seem to respond in a very similar manner to microplastic particles," she says.

The next step is to perform these studies with several different plastic polymers, Lönnstedt says. "Now we know that polystyrene is bad, but we also need to compare it to the other common polymers, such as polyethylene and PVC."

Ultimately, studies like Lönnstedt's could guide efforts to mitigate the entry of microplastics into the oceans by determining the types that may be most hazardous and identifying the most sensitive populations, species and ecosystems.

By posting a comment you confirm that you have read and accept our Posting Rules and Terms of Use.
Advertisement
RELATED ARTICLES
Microplastic Levels High in Northwest Atlantic Fish
First Evidence That Seals Consume Microplastics Via Their Prey
Hazardous Levels of Microplastics Found in Bottled Water
Synthetic Particles Discovered in all Sea Turtles Examined for Study
Watch this robotic fish "eat" plastic
Advertisement