It is possible to significantly slow down and even temporarily stop the progression of global warming by increasing atmospheric aerosol concentrations, a new study from the Finnish Meteorological Institute has shown. However, such climate engineering does not remove the need to reduce greenhouse gas emissions, the study's author adds.

The study, by research scientist Anton Laakso, used global climate models to analyze the ability of atmospheric aerosols to cool down the climate, as well as the consequences of their use. It focused on methods of climate engineering, which intentionally and artificially increase atmospheric aerosol concentrations in order to cool the climate.

Laakso found injecting aerosol particles into the stratosphere proved extremely efficient as a climate-cooling method. The process mimics massive volcanic eruptions that release aerosol particles into the stratosphere and reflect solar radiation back into space, cooling the atmosphere for up to years at a time. Aerosols injected into the troposphere, on the other hand, were found to impact the climate through cloud formation by increasing the number of droplets in clouds and making them whiter and more effective at reflecting solar radiation back into space. 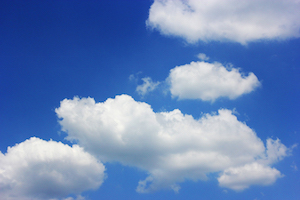 Aerosols injected into the troposphere increased the number of droplets in clouds, making them whiter and more effective at reflecting solar radiation back into space. Image credit: Pixabay.The study also showed that current traffic- and industry-induced aerosol emissions cool the atmosphere—although their cooling effect on global temperatures is significantly smaller than the warming effect of current greenhouse gas emissions. It would be possible to harness, for example, global airline or shipping traffic for the purposes of atmospheric temperature regulation by increasing the sulfuric concentrations of fuels to increase stratospheric aerosol concentrations and cloud reflectivity in the open sea. However, the sulfuric concentrations would have to be increased beyond the levels defined in international agreements and the cooling effect, the study found, would accrue mainly to the northern hemisphere, which is responsible for significantly more global traffic than the southern hemisphere.

Further assessing the ability of climate engineering methods to cool the climate, Laakso modeled the climate effects of a volcanic eruption at a time when aerosol concentrations in the stratosphere were increased for climate engineering purposes. The cooling effect of the volcanic eruption was found to be significantly smaller than it would have been under normal circumstances.

The sulfur dioxide released in the volcanic eruption combined with that injected into the stratosphere for climate engineering purposes would lead to relatively larger particle sizes in comparison to a volcanic eruption under typical conditions. The ability of large particles to reflect solar radiation would be weaker and their life cycle in the atmosphere shorter than those of smaller particles.

If greenhouse gas emissions continue to grow, reversing the resulting global warming via climate engineering would require the injection of increasingly large amounts of aerosols into the atmosphere. The consequence would be increasingly large relative particle sizes with a smaller cooling effect, thus weakening the relative effect of climate engineering, the study concluded.

By posting a comment you confirm that you have read and accept our Posting Rules and Terms of Use.
Advertisement
RELATED ARTICLES
Volcano Masked Pace of Sea Level Rise
Aerosol Emissions Driven by Consumption
A Geoengineering Technique Called Cloud Brightening Could Slow Global Warming
Solar geoengineering could protect crops from climate change effects
Study: The Molecular Makeup of Organic Aerosols
Advertisement