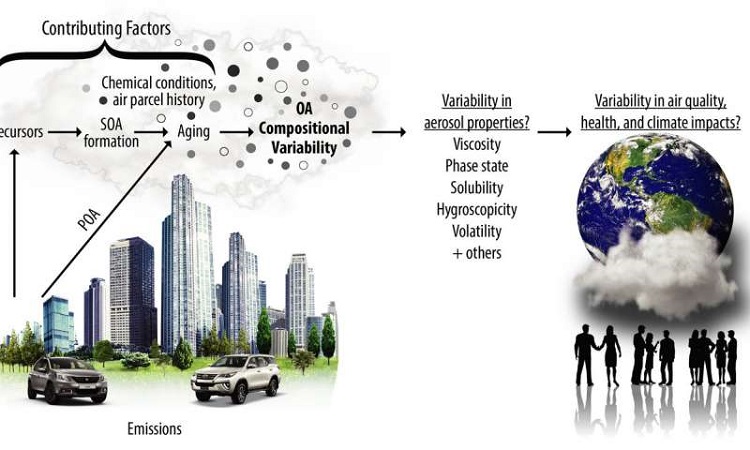 Samples were collected during the summer from a forest in Michigan, and from urban environments in Atlanta and New York City. A large molecular-level variability between multi-hour organic aerosol samples at each site was observed. Up to 70% of the compounds at a site were distinct from each other in consecutive samples.

Precursor modeling and laboratory experiments indicate that such variability is attributable to changes in emitted precursors, chemical age and/or oxidation conditions. These molecular-level results demonstrate greater compositional variability than is typically observed in less-speciated measurements, such as bulk elemental composition, which tend to show less daily variability. The observations should inform future field and laboratory studies, including assessments of the effects of variability on aerosol properties and ultimately the development of strategic organic aerosol parameterizations for air quality and climate models.

Effective air quality and climate management strategies must consider the underlying processes that control this variability and influence the impacts of the coupled emissions-chemistry system.

The research is published in Nature's Communications Chemistry open-access journal.

By posting a comment you confirm that you have read and accept our Posting Rules and Terms of Use.
Advertisement
RELATED ARTICLES
Research Sheds New Light on Origins of Secondary Organic Aerosols
A More Precise Analysis of the Organic Fraction of Smog
Scientists devise new method for tracking cooking-related pollution
New fiber blocks 99% of coronavirus particles
Study: Restaurants Are Significant Air Pollution Contributors
Advertisement