The residual biomass of bananas produced in the province of El Oro, Ecuador could satisfy 55% of its electric power requirements and 10% of the nation's bioethanol demand, Universidad Politécnica de Madrid (UPM) researchers have concluded.

Bananas are a tropical, herbaceous and perennial crop that produces one huge flower cluster, which then dies. The plant is cut to bring the crop in, allowing the stem and leaves to turn into lignocellulosic biomass that is either left on the ground or taken to open dumps. 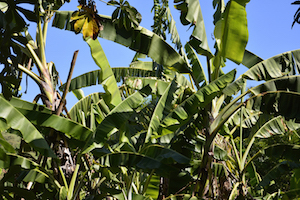 Ecuador has 224,137 hectares of bananas under cultivation. Image credit: Pixabay.In addition to lignocellulosic biomass, another waste is the rejected fruit—8% to 20% of annual production—that fails to meet quality standards for consumption. These leftovers are sometimes used for animal feed, but most producers leave them to decompose outdoors for economic reasons.

UPM researchers led by Professor María Dolores Curt assessed the residual biomass potential of bananas from Ecuador—the world's largest exporter of this commodity—using geographic information systems to estimate crop production. Sampling and field data collection were carried out in El Oro province to establish the correlation between residue and product. The chemical composition of biomass and the lower heating value were analyzed in a lab.

Analyzing secondary data, they estimated that transporting biomass is viable up to a distance of 20 km. The team also assumed that approximately 64% of available banana biomass would be used for energy production. Finally, they proposed two locations for power stations from lignocellulosic biomass and bioethanol production from rejected bananas.

Results show that the exploitable potential area would be 38,604 hectares producing 190,102 tons per year of discarded bananas (fresh matter) and 198,602 tons per year of lignocellulosic biomass (dry matter). As a result, 19 millions of liters of bioethanol could be produced, and the installed power of the two electric generating plants could reach 18 megawatts.

In addition to meeting over half of the province's electricity needs, and one-tenth of the country's bioethanol demand, use of banana waste would diversify the energy matrix of the country, create jobs and boost the local economy and rural development, the researchers note.

By posting a comment you confirm that you have read and accept our Posting Rules and Terms of Use.
Advertisement
RELATED ARTICLES
Japanese Farmer Grows Banana with Edible Peel
This multitasking tree treats wastewater, produces biofuel
Video: Banana peeling robot shows what is possible for the future of food processing industry
Microorganism can produce biodiesel from cardboard
Banana peels key to tackling food waste?
Advertisement