Getting to 80: Engineering Challenges in Achieving Extended Lives for Nuclear Power Plants

The nuclear power industry is at a crossroads with new and aging plants. As of early 2015, the United States will have 99 active nuclear power plants generating nearly 20% of the country’s electricity. The Watts Bar Unit 2 nuclear reactor in Tennessee is slated to join the fleet in December 2015, but with only four other new nuclear power plants in the works, the industry needs to keep existing facilities operating longer to ensure uninterrupted electricity supply throughout the U.S.

The U.S. Nuclear Regulatory Commission (NRC) originally licensed reactors to operate for 40 years, with operators able to apply for a 20-year license extension to target 60 years of operation. Of the current fleet, 73 have received those extensions. Now, however, nuclear energy companies are investigating a second 20-year extension to 80 years while identifying and addressing engineering and economic challenges to make that goal happen.

According to a 2013 study from the American Physical Society (APS) titled “Renewing Licenses for the Nation’s Nuclear Power Plants,” approximately 100 GW of power will begin shutting down by 2030 if licenses are not renewed beyond the 60 years. Furthermore, nuclear energy accounts for 63.3% of the country's emission-free electricity generation, making it the biggest, most reliable source of clean energy—a boon to the United States’ energy infrastructure as the federal government seeks to cut carbon pollution from all power plants by 30% from 2005 levels.

The push to achieve this additional 20-year life extension for nuclear power plants is in its infancy yet timely given the estimated planning time of 10 to 15 years for utilities to determine whether to renew their licenses. Additionally, the process for the NRC to renew a license in the U.S. takes about five years. (Currently, the United States is the only country pursuing an additional 20-year extension.)

“The first units that will hit the end of the 60 years will be in the late 2020s, so it is important that the industry first come up with the decision to have a program and then to actually design a program,” says Jone-Lin Wang, vice president and head of research and consulting for Power, Gas, Coal & Renewables–Americas at IHS.

Such a program hinges on the NRC because it provides the licensing rules. “In order for us to be able to accomplish extending those licenses for an additional 20 years, the rules have to be established,” says Cynthia Pezze, vice president and chief technology officer, research and technology at Westinghouse Electric. “You also need to do work with industry codes and standards to support changes to assure they will be in place when you need them.”

Keeping a plant operational for a longer period of time is far less capital intensive than building a new facility, Wang says. Still, the APS study concluded that license extension is not the final objective for the future of nuclear energy.

“We would hope these plants can stay operating as a bridge to the United States coming along with a modern set of reactors that are well-designed and economic,” says Roy Schwitters, a physicist at the University of Texas at Austin and chair of the study committee responsible for APS report.

Although the APS study did not identify any so-called “technical showstoppers” that would prevent the renewal of licenses to 80 years, nuclear power plant operators still need to address a host of engineering considerations should another 20-year extension be approved.

Most nuclear plants were originally licensed for a set period that related to estimates of how long it would take to amortize the costs of construction, says Henri Pelin, senior advisor with the World Nuclear Association. “There was and is no fundamental concept of an engineering ‘end of life’ as this is determined by how components age — something the builders couldn’t know with certainty — and the cost of replacing them down the line,” he says.

Additional factors for consideration include the replacement of transformers and underground piping, a renewal of the control rooms and associated instrumentation and control systems, the addition of emergency equipment such as diesel generators and pumps and reinforcement of infrastructure to seismic conditions.

Thanks to inspection and maintenance programs already implemented at nuclear power plants to ensure their ongoing safe and reliable operation, the industry is poised to face technical and engineering problems head-on.

“The extension from 40 to 60 years started 15 years in advance of those units reaching that date,” says Lee Williams, senior vice president, Installed Base Projects, at AREVA Inc. “The industry conducted extensive research and engineering work to ensure that the plants continue to operate safely. There have been millions of dollars invested in these units over the past 25 years in both mechanical upgrades, like steam generators, as well as instrumentation and control (I&C) systems.”

In addition to material degradation issues relating to aging concrete as well as buried piping and cable, supply chain management also may emerge as a potential challenge. “Over such a long period of time, technologies and/or suppliers evolve and may disappear,” Pelin says. “This is often an issue with I&C components and suppliers.”

Critical to managing this problem is adequate provisioning — that is, projecting years in advance the types of equipment or components needing replacement in the event that spare parts become obsolete.

“If you have component X, Y or Z and this manufacturer is no longer around or no longer providing the solution with the necessary pedigree to go to the regulator, there are ways you can engineer and analyze similar components to see if there is an equivalency that can be used,” sayss Michael Hsia, product manager engineering programs for AREVA.

Williams also says that engineering challenges can be unit-specific. “You have different mechanisms of aging for a unit on the coast because of issues related to saltwater versus one that is inland.”

Monitoring the Old, Building the New

When it comes to testing, monitoring and measuring a nuclear power facility’s aging components, engineers and technicians have access to a number of methodologies and guidelines. EPRI has published reports that inform the development and implementation of aging management programs based on decades of research experience associated with identifying possible degradation mechanisms and understanding inspection technologies, evaluation methodologies and mitigation strategies. 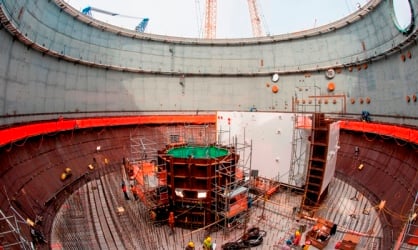 Modules inside the Vogtle 3 AP1000 containment vessel lower ring. Source: Georgia Power Co.New technologies also can help, as reported by the World Nuclear Association, including special devices that allow in-situ condition monitoring for critical components such as valves and steam generator tubes, periodic ultrasound or x-ray examinations on weldings, and full physical mockups that can be constructed to simulate components and their aging.

Four new Westinghouse AP1000 nuclear reactors being built in the United States (including Georgia Power's Vogtle Unit 3, pictured), along with another four in China, will feature a simpler design that could facilitate a longer lifespan, says Pezze.

“The AP1000 plants have fewer active components like pumps and valves,” Pezze says. “A completely digital control room means the plants use dramatically less cable, which lends the plant to being easier to maintain and enables cable replacement, if that is needed, to be done in a much less complicated way.”

In the discussion of a second 20-year license extension, other influences beyond engineering come into play. Not only does license extension have to be technically viable, it also has to be economically feasible.

“The physical condition of the plant is just one factor,” says EPRI’s Bernhoft. “Projected market conditions, for example, may be such that continued investment in the plant for another 20 years is not economic, even if the plant is technically able to continue operating.”

In the U.S., the Crystal River (Florida) and San Onofre (California) nuclear generating plants recently closed due to technical difficulties that would have required significant capital investments to return the units to operation. Meanwhile, Wisconsin’s Kewaunee plant shut down because the ongoing power market failed to deliver enough revenues to cover operating expenses. The Vermont Yankee nuclear power station will go offline by the end of 2014 with its owners citing the declining cost of natural gas that make it too expensive to produce nuclear power, although political factors also influenced that shutdown.

In fact, low gas prices and an oversupply in the overall power capacity coming out of 2012 led to lower revenues for many U.S. nuclear plant owners. “As the economy has improved and gas prices have recovered a bit, we are forecasting that the revenue situation for nuclear plants also will improve,” says Gary McDonald, research associate, North American power, at IHS Energy. “We don’t see that many more plant retirements beyond the ones that are currently announced in the next decade.”

IHS’s Wang also points out that just because a plant receives another 20-year extension does not mean it will be operational the entire time due to economical and technical pressures. “One would imagine the possibility that if we do have a second 20-year program, not all of plants are candidates to pursue, or they may not end up getting it,” she says.

Another potential pitfall facing the industry is knowledge transfer. “The challenge of maintaining intellectual capital becomes more acute as plants operate for longer,” says Pelin. “People and even organizations change over that time period. Training programs and knowledge capture are vital for maintaining and improving plant performance over the long run while the continued sharing of operating experience internationally helps to avoid and mitigate unplanned events.”

AREVA, for one, is addressing this issue by partnering with The William States Lee College of Engineering, University of North Carolina at Charlotte in areas of R&D and also to help ensure "we have the right personnel with the right skill sets to successfully engineer and operate this machinery,” Williams says.

Despite the concerns surrounding knowledge transfer, Schwitters says that the greatest tools in addressing the engineering challenges of license extension are the people.

”The nuclear power industry has an active research community, along with well-trained operators and engineers who deal with engineering problems day after day,” Schwitters says. “They know the history of the materials and perform robust, detailed testing of critical components. They have a physical understanding of the aging processes and are able to anticipate future problems.”

As the U.S. nuclear energy industry considers nuclear power plant operation of up to 80 years, multiple engineering challenges will arise surrounding aging infrastructure and components. Given that nuclear power plant owners already meticulously inspect and scrutinize their operations, however, the industry may already be one step ahead as it looks to secure future energy supplies.

By posting a comment you confirm that you have read and accept our Posting Rules and Terms of Use.
Advertisement
RELATED ARTICLES
UK Nuclear Plant Gets 10-year Operating Extension
Could Retirements Push U.S. Nuclear Power Off a Cliff?
Watch: Get to climate goals by extending nuclear plant life
JV Plans to Decommission Oyster Creek Nuke Within 8 Years
Nuclear Power Plant Granted 20-year Extension
Advertisement