Watch: Get to climate goals by extending nuclear plant life

More than two thirds of the 442 nuclear power reactors currently in operation are over 30 years old and approaching the end of their originally planned 40-year service life. Refurbishing aging components can safely extend facility operational lifetime and increase the availability of reliable low carbon power, helping to meet climate goals and the transition to clean energy by 2050.

The accompanying animation, based on data from the Climate Change and Nuclear Power 2020 report issued by the International Atomic Energy Agency (IAEA), shows how extending the global plant fleet’s lifetime by 10 years would have a multiplying effect, adding 26,000 TWh of low carbon electricity generation. Life extension licenses have already been awarded to about 100 nuclear power reactors. Annual emissions would have been around 2 gigatons of carbon dioxide higher over the past decade if electricity from nuclear power plants had instead been supplied using the average global fossil fuel generation mix.

Extending the lifetime of operating plants by a second decade to 60 years would generate an additional 31,400 TWh of electricity, representing almost 2% of the world’s low carbon electricity produced between 2020 and 2080. Lifetime extension to 80 years total would more than double those figures.

The levelized cost of electricity (LCOE) associated with the long-term operation of a nuclear power plant generally falls in the range of $30/MWh to $40/MWh for typical refurbishment costs for light water reactors and a lifetime extension of 20 years. This is comparable to the LCOE of new wind and solar photovoltaic plants and is considered one of the most cost-effective routes to producing low carbon electricity. 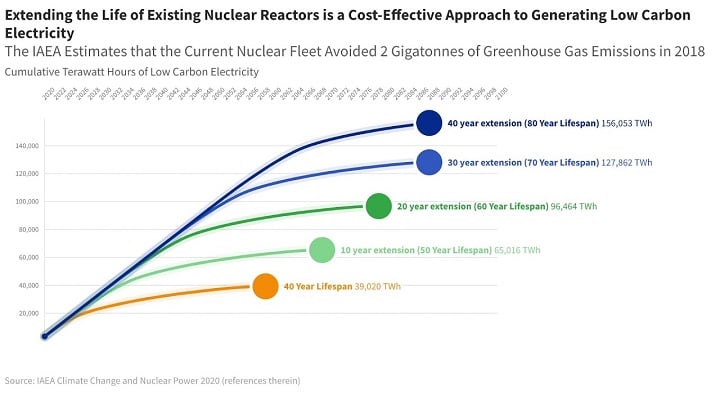 Re: Watch: Get to climate goals by extending nuclear plant life
#1

Having grown up in the sixties and seventies, and all the No Nukes stuff, this does come with a certain level of irony.

Re: Watch: Get to climate goals by extending nuclear plant life
#2
In reply to #1
phoenix911

What hot today is not tomorrow...