In an advance on previous research, scientists from MIT, University of Sheffield and Tokyo Institute of Technology have designed an origami robot that unfolds in the stomach once ingested. The untethered device, propelled by stick-slip motion and steered by external magnetic forces, was demonstrated to retrieve a button battery in an artificial stomach. 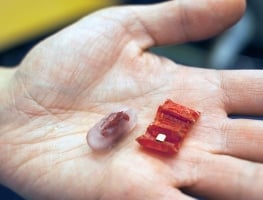 The capsule and the unfolded origami device. Image source: Melanie Gonick/MITIn addition to removing foreign objects that have been ingested, the researchers suggest the origami robot might also be used to treat internal wounds or for targeted drug delivery.

The robot is composed of biocompatible material that is placed between two structural layers of dried pig intestine and that shrinks when heated. After being swallowed, the capsule that holds the robot dissolves and the structure expands into a rectangular shape with accordion folds perpendicular to its long axis. A magnet placed in one of the forward folds enables external control of the device (see video).

The robot can propel itself using what’s called a “stick-slip” motion, in which its appendages stick to a surface through friction when it executes a move, but slip free again when its body flexes to change its weight distribution.

But because the stomach is filled with fluids, the robot doesn’t rely entirely on stick-slip motion. Researchers calculate that 20% of forward motion is by propelling water — thrust — and 80% is by stick-slip motion.

In the center of one of the forward accordion folds is a permanent magnet that responds to changing magnetic fields outside the body, which control the robot’s motion. The forces applied to the robot are principally rotational. A quick rotation will make it spin in place, but a slower rotation will cause it to pivot around one of its fixed feet. In the researchers’ experiments, the robot uses the same magnet to pick up the button battery.

The researchers tested about a dozen different possibilities for the structural material before settling on the type of dried pig intestine used in sausage casings. To design their synthetic stomach, the researchers bought a pig stomach and tested its mechanical properties. Their model is an open cross-section of the stomach and esophagus, molded from a silicone rubber with the same mechanical profile. A mixture of water and lemon juice simulates the acidic fluids in the stomach.

Every year, 3,500 swallowed button batteries are reported in the U.S. alone. Frequently, the batteries are digested normally, but if they come into prolonged contact with the tissue of the esophagus or stomach, they can cause an electric current that produces hydroxide, which burns the tissue.

One researcher put the battery on a piece of ham. Within 30 minutes, the battery was fully submerged in the ham.

By posting a comment you confirm that you have read and accept our Posting Rules and Terms of Use.
Advertisement
RELATED ARTICLES
Ingestible Robot Can Be Controlled by Magnets
Caterpillar-inspired millirobot eyed for biomedical applications
A New Micromotor Pill to Swallow
Stomach-worn wearable could inject life-saving meds to thwart opioid overdose
Watch a tiny jellyfish robot swim through several tasks
Advertisement