Hyundai Motor Co. says that hydrogen fuel cell vehicles will be the future of eco-friendly cars, more so than all-electric vehicles (EV). 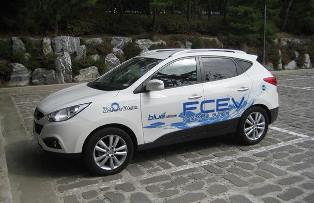 The Hyundai Tucson Fuel Cell SUV has fallen short of sales estimates, but is expected to grow over time as prices for the vehicle decline and fueling stations grow. Source: HyundaiIn 2014, Hyundai sold 273 of its Tucson Fuel Cell SUV, short of its goal of 1,000 sales. Most of those were bought in Europe and California. The vehicles retail for $76,000 each.

In the next 10 years, Hyundai says it plans to invest another $10 billion in hybrid cars, electric battery vehicle and hydrogen fuel cell models.

He says that hydrogen fuel cell vehicles have greater design flexibility because they can be scaled for a range of sizes.

Hydrogen fuels cells are already being used in trucks and buses, according to Devin Lindsay, IHS Automotive’s senior analyst. That is an advantage because all-electric engines do not perform as well in larger vehicles, which require bigger batteries that need more charging, Lindsay says.

Hydrogen fuel cell vehicles emit only water vapor as exhaust, can travel up to 300 miles on a tank of fuel and refuel in five minutes. Hydrogen fuel is created by the steam-methane reformation method—a process by which high-temperature steam creates a reaction with methane gas in the presence of a catalyst to produce hydrogen, carbon monoxide and a small amount of carbon dioxide. The impurities of the product are removed through “pressure-swing adsorption,” which creates essentially pure hydrogen.

By posting a comment you confirm that you have read and accept our Posting Rules and Terms of Use.
Advertisement
RELATED ARTICLES
Here's why hydrogen is still an option for automobiles
The Hyundai Nexo Addresses the Shortcomings of Electric Vehicles
Hydrogen Dispenser Takes Home the Prize
Waste Coffee Used for Methane Storage
Global LEV Markets Are on the Rise
Advertisement