A new study by researchers from the Massachusetts Institute of Technology (MIT) concludes that when operating and maintenance costs are included in a vehicle's price, autos emitting less carbon are among the market’s least-expensive options on a per-mile basis.

The researchers examined 125 popular automobile models sold in the U.S. To estimate vehicle cost, they accounted for both the sticker price and the operating expenses over the vehicle lifetime. In estimating emissions, the calculations included emissions from each vehicle’s operations and the emissions stemming from manufacturing it and producing its fuel.

Smaller hybrids and electric vehicles, such as the Toyota Prius and Nissan Leaf, fare very well and are among the cheapest autos per mile driven, the study found. Small combustion-engine cars are also low in cost but emit up to 40% more greenhouse gases than their hybrid and electric counterparts. 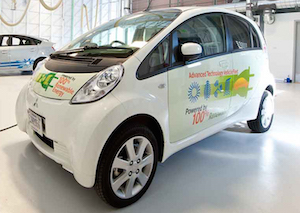 Smaller hybrids and electric vehicles are among the cheapest per mile driven. Image credit: Dennis Schroeder/NREL.The Chevrolet Suburban, by contrast, is among the most expensive and highest-emitting popular vehicles. Luxury sedans such as the Mercedes E350, the study found, are more expensive per mile than the Suburban but emit about two-thirds as much carbon.

“Our results show that popular alternative-technology cars such as the Nissan Leaf can already save a considerable amount of emissions today, while being quite affordable when operating costs are considered,” says Marco Miotti, a doctoral student at MIT's Institute for Data, Systems and Society (IDSS). “Notably, the benefit of the efficient electric powertrain far outweighs the added emissions of manufacturing a battery.”

"There are a lot of myths floating around about hybrid and electric cars”—says Geoffrey Supran, a postdoctoral researcher at IDSS—for example, concerning the manufacture of those vehicles or their reliance on conventional electricity sources. This often leads people to claim that “they’re no better than your average gasoline vehicle. Our study shows that’s just not true,” he says.

Vehicle costs and emissions vary regionally, the study notes. For instance, Western states draw from renewable energy sources (mostly solar and wind) to a greater extent than states in the Midwest. On aggregate, therefore, plug-in electric vehicles will draw upon cleaner sources of electricity in the West than in the Midwest and produce lower emissions overall.

To reach a wider audience, the MIT team developed an app with which people can look up their current car, or a car they are considering buying or leasing, to see how it performs in terms of costs and carbon emissions.

By posting a comment you confirm that you have read and accept our Posting Rules and Terms of Use.
Advertisement
RELATED ARTICLES
Vehicles' Carbon Footprints Vary by Region
Tool estimates greenhouse gas emissions for EVs and PHEVs
Tokyo Will Become the First City With a Fleet of Autonomous Taxis
Ford probes possible error in how it figures emissions and fuel economy
New Nissan Leaf Offers Drivers One Pedal Driving
Advertisement