Printing Electronics with a Pen

Scientists at INM, the Leibniz-Institute for New Materials in Germany, have combined organic and inorganic electronic materials to develop a new type of hybrid ink that allows them to write electronics on paper directly from a pen without the need for sintering.

The team used coated nanoparticles made from metals with organic, conductive polymers, then suspended them in mixtures of water and alcohol. The suspensions can be directly applied to a surface, including paper, and when they dry electrical circuits are formed without the need for further processing. 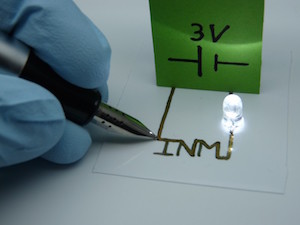 Electronic circuits straight from a pen. Credit: INM - Leibniz-Institut für Neue Materialien gGmbHCombining the organic polymers with gold or silver nanoparticles allows the compounds to serve as ligands, keeping the nanoparticles suspended in the mixture and reducing the possibility of agglomeration. The ligand also assures the particles arrange correctly during the drying process, and act as hinges, maintaining electrical conductivity if the material is bent. Without the polymer sheath, conductivity is lost. But the combination of both materials achieves a higher level of conductivity than in a layer of only conductive polymer or a layer of metal nanoparticles.

Unlike current methods, which incorporate metal nanoparticles with ligands, the new process does not require sintering to remove the non-conductive shells of the particles. The sintering process limited the carrier materials such as paper or polymer, because sintering would damage the substrate. With the hybrid ink, there is no sintering necessary, so electronics could be printed on even the most fragile substrate and remain robust.

Tobias Kraus, Head of the research group Structure Formation at INM stated, “the combination of metal and nano-particles that we introduce here combines mechanical flexibility with the robustness of a metal and increases the electrical conductivity."

By posting a comment you confirm that you have read and accept our Posting Rules and Terms of Use.
Advertisement
RELATED ARTICLES
New Hybrid Inks for Printed, Flexible Electronics Without Sintering
Research creates 4x strength metals from nanoparticles
Surgery Creates Custom Nanoparticles
'Bijels' Could Lead to Soft Robotics, Liquid Circuitry and More
Browse a Megalibrary to Quickly Discover New Materials
Advertisement