Researchers have developed an inexpensive means to create polymers that mimic proteins, with the versatility of their raw ingredients as well as how they link together to form a larger structure than the original. But, unlike nature’s proteins, the synthetic versions could be more stable and long lasting, which was the impetus to develop their own sequence-defined polymers. 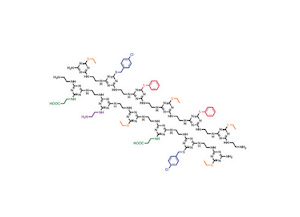 Plastic proteins developed at PNNL. Image credit: PNNLResearchers at the Department of Energy's Pacific Northwest National Laboratory were looking at the three main characteristics of a protein: a backbone that can support side chains; ability to order the side chains; and non-covalent bonds. Using cyanuric chloride as a launching point, they worked to find a way to synthesize it into a triazine-based polymer (TZP). They created a variety of monomers by adding different side chains to the cyanuric chloride, adding them one at a time and changing the temperature of the chemical reaction. The resulting polymers six monomers long, 6-mers, 12-mers, and 3-mers were verified. Analysis showed the polymers were sized correctly, had the correct side chains and the chains were in the correct order. They currently have achieved 10 side chains and are working to increase the number for longer polymers and to understand how to design the TZP to create specific shapes that will also assemble into larger structures.

The value of proteins is to engineer and build an organism’s parts in nature. However, proteins are designed to be temporary. Synthetic proteins could be designed to be permanent structures, although they would likely not be immune to degradation. They anticipate bacteria could break them down, making them long-lasting, but not permanent.