Technology for capturing carbon emitted by power plants and using it to create a new building material is under development. 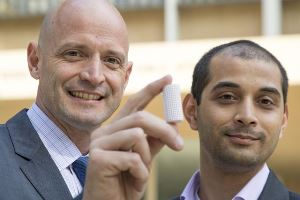 J.R. DeShazo, left, and Gaurav Sant hold a sample of the building material created to replace concrete. Image source: Roberto Gudino/UCLA.Researchers at the University of California at Los Angeles (UCLA) are advancing a closed-loop process for converting carbon dioxide into CO2NCRETE, fabricated using 3D printers. Instead of storing captured carbon, the gas will be “upcycled” to yield a material intended to replace cement. This will help to trim global carbon emissions, because cement production accounts for 5% of the planet’s greenhouse gas emissions (see video).

The researchers examined the carbonation of portlandite (Ca(OH)2) by carbon dioxide in the liquid and supercritical states. Thus far, the construction material has been produced only at a lab scale, using 3D printers to shape it into cones. “We have proof of concept that we can do this,” says J.R. DeShazo, professor of public policy at the UCLA Luskin School of Public Affairs. “But we need to begin the process of increasing the volume of material and then think about how to pilot it commercially.”

The researchers say the material could change the economic incentives associated with fossil-fired power plants and turn smokestack flue gas into a resource countries can use.

By posting a comment you confirm that you have read and accept our Posting Rules and Terms of Use.
Advertisement
RELATED ARTICLES
Cement Manufacturing Could Become Carbon Neutral
Once Carbon Dioxide is Captured, Here’s What You Can Do With It
Metal organic frameworks can fight climate change
Dubai Seeks to Cut Carbon Emissions with Rules Aimed at Cement
Carbon-injected concrete can help reduce carbon emissions
Advertisement