Charging EVs at Night May Do More Harm Than Good

Charging EVs late at night, when demand is low and electricity is cheapest to generate, is generally preferred by both grid operators and EV owners. However, CMU researchers found that it produces substantially higher greenhouse gas emissions and air pollution than simply charging as soon as the driver returns home. 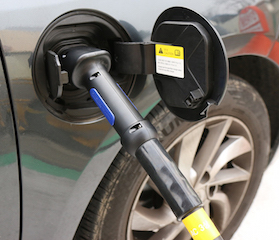 Charging late at night reduces power generation costs by a quarter to a third. Image credit: Pixabay.The study, carried out by Jeremy Michalek, professor of engineering and public policy and mechanical engineering, and colleagues modeled the PJM region, which includes Washington, D.C., Philadelphia, Pittsburgh, Cincinnati and Chicago. It examined how power plant operations would change in response to EV charging load—and modeled emissions from those plants and their downwind air pollution consequences.

“We found that charging late at night reduces power generation costs by a quarter to a third, largely by shifting to cheaper coal-fired power plants," says Michalek. "But the extra emissions released as a result can cause 50% higher costs to human health and the environment.”

Michalek adds that the picture could change in the future, as many coal-fired power plants are expected to be retired in response to recent regulations. “As coal is phased out and the grid becomes cleaner, the emissions implications of charging at night will be mitigated,” he says, “and the benefits of late-night charging for the electricity grid may be good reasons to delay charging.”

By posting a comment you confirm that you have read and accept our Posting Rules and Terms of Use.
Advertisement
RELATED ARTICLES
So then, where is my electric vehicle (EV)?
Study offers insight into EV charging habits
EV wireless charging moves closer to reality with Volvo investment
Duke Energy Offers Truck Stop Plug-in Kiosks
World’s largest solar battery nears completion
Advertisement