Robotic Vessel Could Clean Trash from the Oceans 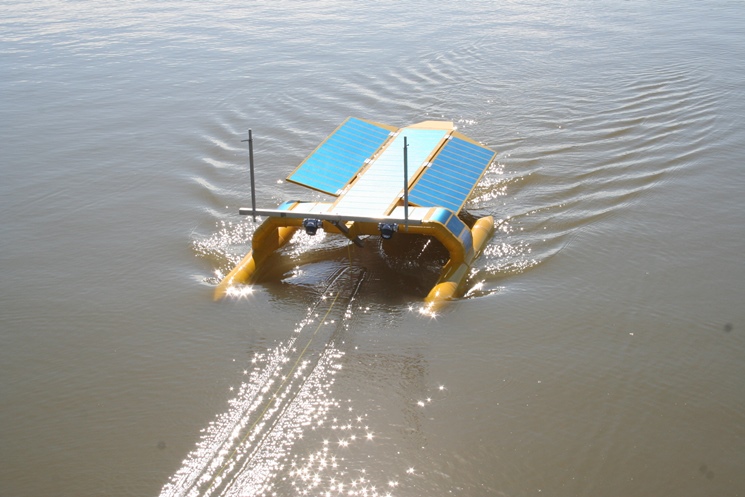 Sail into the middle of any of the world's oceans and you will not necessarily find clear blue water. Instead you may well encounter a “gyre” or concentration of floating plastic refuse. Indeed, anywhere from 8-12 million tonnes of the material is currently estimated to be out there with potentially serious environmental consequences, including degradation of the foodchain if it is ingested by marine life. The financial damage this causes has been estimated by the United Nations to be the equivalent of $13 billion per year.

A small UK company has come up with a possible solution – the design for a highly innovative and completely autonomous type of vessel that could patrol the seas for lengthy periods of time collecting the waste material like a gigantic “seaborne vacuum cleaner.” The description is provided by Chris Close, project leader with Bluebird Marine Systems, based at Herstmonceux, Sussex, close to the English Channel Coast, in an initiative which aims to develop a highly innovative vessel aptly called the SeaVax.

The SeaVax will be a 140-foot-long trimaran capable of propelling itself almost endlessly by means of electric motors powered by a mix of on-board wind turbines and an array of solar panels that cover most of its upper surface. More pertinently, the other key capability of the vessel is that it can be guided by remote command toward known gyres of plastic, detect their precise location and then collect and store up to 150 tons of the material for retrieval either after it has returned to shore or even while still at sea.

Appropriately for a vessel intended to help improve the global environment, the SeaVax will also aim to set a new standard for the efficiency with which electrical propulsion can be used on water. Until now, says Close, no solar powered vessel has exceeded a power-to-weight ratio of 0.98kW per ton. The SeaVax is intended to multiply that performance level several times. A 30-ton version of the vessel will achieve a ratio of 2.2kW per ton, and a 50-ton version will achieve 1.32kW per ton. But theoretically, he says, a high-performance rather than workboat vessel like the SeaVax could push those figures as high as 5-7kW per ton. It will do so by combining its mix of on-board power generation capability with a number of other techniques that will optimize efficiency.

One of these is that the wind turbines will be mounted on telescopic booms. This will enable them to be either retracted close to the hull to avoid damage in storm conditions or to be raised so that their tips rise 23 meters above the water to catch the stronger windflows at that height. This capability will be combined with a “solar tracking” system driven by on-board computer hardware, which means that the turbines and solar panels will never operate in ways that compromise overall power generation potential.

Close says that not only will the solar panels be able to rotate to keep them pointing directly at the sun, but the software will also ensure that the turbines will not be deployed in a way that would cause them to cast a shadow over the panels. He describes the overall concept as that of an “active hull” and says that the use of the two power generation technologies in such a context is unprecedented. “There has never been a vessel that has had active solar tracking and active wind turbines operating together,” he says.

In detail, the relevant figures are that the vessel should be capable of generating a total of 84kW of power – 40kW from its two turbines and 44kW from its 220m2 of solar panels.

Another task for the on-board computing resource will be to ensure that the vessel is fully compliant with relevant collision avoidance regulations. In order to achieve this, the vessel will use sensor technologies including laser-based LIDAR. The total amount of computing power required to control all the vessel's operations will, Close says, be roughly equal to a couple of high-end PCs.

At the moment, the SeaVax concept exists only as a one-twentieth scale model, but the company is looking for the finance that would enable it to build the first of what it envisages as a flotilla of the vessels at full scale. Close says that around £2.5 million ($3.75 million) is needed to get a basic aluminium-hulled vessel into the water that would demonstrate its seaworthiness. As much as three times that amount would be required to create a vessel equipped with the necessary control software and equipment for retrieving and handling the waste materials.

At present, some details of precisely how the vessel will operate remain confidential because any premature disclosure would prejudice the company's ability to patent them. These include how it will zero in on concentrations of waste and a projected methodology for offloading the material to a larger transport vessel while at sea. But the company says that the vessel will use a “multi-filtration” technique that will enable it first to identify and then deal with the sheer variety of material it may encounter, which could range upwards from microplastic particles to abandoned fishing nets weighing as much as 10 tonnes.

By posting a comment you confirm that you have read and accept our Posting Rules and Terms of Use.
Advertisement
RELATED ARTICLES
Self-fueling Boat to Circumnavigate the Globe
Watch: Floating port/installation vessel to streamline offshore wind development
Nuclear transport ship is fully recycled
Video: Green submarine designed for UK maritime sector
Iowa's Only Nuclear Power Plant Is Set to Close
Advertisement