A purpose-built nuclear transport ship decommissioned in November 2020 after 33 years of service has now been fully recycled. Launched in 1987, the Japanese-built ship was the first vessel to transport mixed-oxide fuel from Europe to Japan. 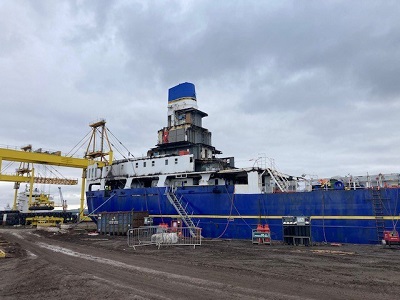 The decommissioned nuclear transport ship has been fully recycled, a first for the U.K. Source: Dales Marine Services100% recycled by Dales Marine Services. The recycling effort involved separating different oils from water for use as furnace fuel, converting insulation into electrical energy, and crushing concrete and tiles to create material used in the construction industry.

Reusing 100% of a nuclear vessel is a U.K. first and supports the government’s carbon net-zero policies.

What about the nuclear waste? Was it recycled?

Re: Nuclear transport ship is fully recycled
#2
In reply to #1
Nothing is Impossible

You do realise the ship was powered by IEC internal combustion engines dont you ?
Did you assume it was nuclear powered ?

The nuclear materials transported by this vessel were both recyclable , made safe or they were new materials being taken to their destination place of use.

Re: Nuclear transport ship is fully recycled
#3
In reply to #2
PAPADOC

Re: Nuclear transport ship is fully recycled
#4
In reply to #3
Nothing is Impossible

every time nuclear power is discussed it gets very emotive before it gets technical.

Greenies say JUST LOOK AT CHERNOBYL ! !
Which was a poorly maintained 1950 design.
JUST LOOK ! at Three Mile Island , which was again a 1960's design

Fukushima , 1950's design by GE that was supposed to be decommissioned 4 years prior.
Modern nuclear system designs cannot go into melt down.
But it sure gets the emotive responses going.

Re: Nuclear transport ship is fully recycled
#5
In reply to #4
PAPADOC

Have you seen the amount of spent nuclear rods that must be stored in 10000 years? A way to neutralize them hasn't been developed yet, so they will increase in time. With the use of nuclear power for desalination, hydrogen production, and general electrical power use, the amount of rods will continually get larger. Do you believe that?

Re: Nuclear transport ship is fully recycled
#6
In reply to #5
MNIce

Fuel reprocessing in a breeder reactor cycle can significantly reduce the amount of waste. Reactor fuel is typically more than 90% U-238, which is not fissionable. However, while in use in the reactor, some of it is converted to Pu-239, which is fissionable. The industry already has significant experience with Pu-239 fuel made from old nuclear weapons recycled under an arms treaty with Russia during the G. W. Bush administration. During reprocessing, the daughter elements can be separated so only the long-life components need to be prepared for long-term storage.

There is also potential for using fission waste in an energy-absorbing liner in a D-T fusion reactor; the emitted neutrons may transmute some isotopes into less hazardous material, thereby generating heat that can be extracted. That is speculative at this time because a practical fusion power reactor has yet to be developed, but it has been identified as a follow-on technology.

Leaving the uranium in the ground poses environmental hazards of its own. Residents of Indian reservations in the Dakotas and Wyoming have high cancer rates in part due to radon gas emitted into their homes from underground uranium deposits, and radium in their water wells from the same sources. In many cases, these deposits can be cleanly and economically removed via in situ extraction, but sadly, the residents have been persuaded by earth worshippers (this is a literal description, not a pejorative rhetorical label) to deny access to these deposits.

The volume of the nuclear waste disposal problem is not as bad as that of getting rid of huge worn-out non-recyclable wind generator blades. We have identified facilities and methods for safely sequestering nuclear waste; we only lack the political will to use them. That's been the case for several decades now.