Recognizing that only a small portion of the geothermal energy that exists in the U.S. is accessible with current technology, the U.S. Department of Energy (DOE) has implemented the Enhanced Geothermal Shot with the goal of bringing geothermal costs down 90% by 2035 as part of its Energy Earthshots Initiative.

Enhanced geothermal systems (EGS) create man-made geothermal reservoirs in places where naturally favorable amounts of permeability or water are lacking. EGS reservoirs are created by first drilling wells and then pumping water to create permeability. Water can then be circulated continuously and tapped for electricity production or direct use. While there are technically over 5 TW of geothermal energy potential in the U.S. — sufficient to meet global electricity needs many times over — most is in areas accessible only via new human-made geothermal reservoirs such as EGS. 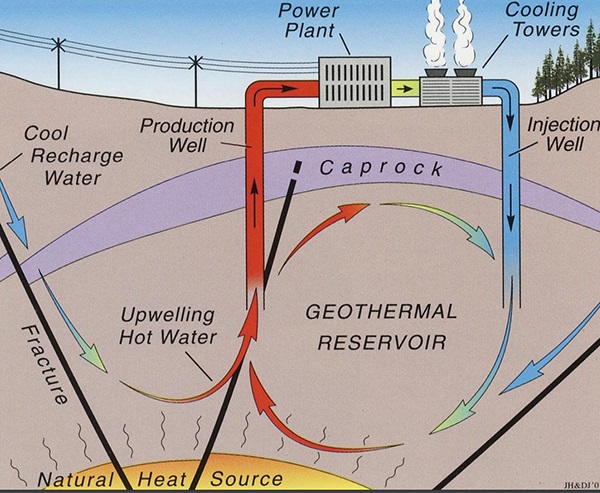 DOE is providing support for the Frontier Observatory for Research in Geothermal Energy (FORGE), which recently announced $44 million in new R&D funding, and for its Geothermal Energy from Oil and gas Demonstrated Engineering (GEODE) initiative, which will provide up to $155 million to transfer best practices and workforce from the oil and gas industry to geothermal energy. DOE will also support $84 million in funding for four new EGS demonstration projects under the Bipartisan Infrastructure Law.

Increasing subsurface permeability is just a fancy term for fracking.