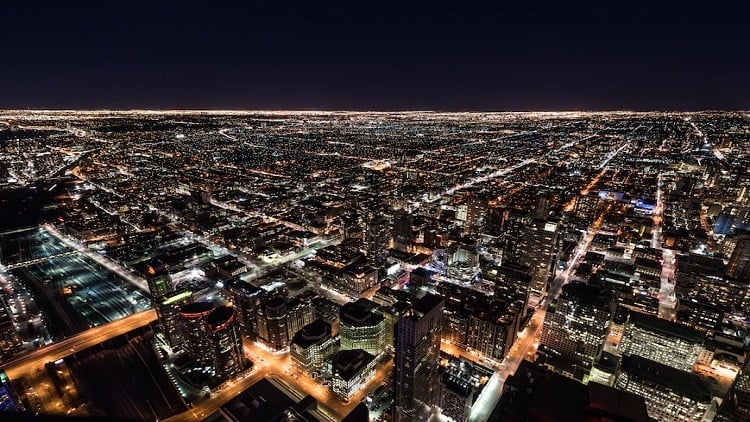 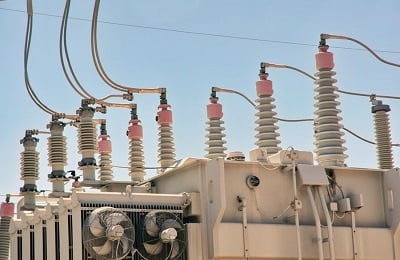 Power transformer station. Source: Robert Linder/Unsplash efficiency. The coulombic efficiency describes the charge efficiency of batteries, and for lithium-ion batteries it is quite high at better than 99%. For example, the full discharge and charge cycle of the Tesla Roadster is said to be 86%, however newer electric vehicle (EV) models sport ultra-fast charging, which lowers battery life and energy efficiency but is often more practical.

Power converters are devices that can convert alternating current to direct current and vice versa. These devices can also change the voltage or frequency of the electric current. Ranging from transformers to resonant converters, there are a wide range of devices to suit a multitude of needs.

Ideal converters would be 100% efficient, but many types of converters have low efficiencies. Typical distribution transformers often perform better than 98% efficiency while devices such as phone chargers and desktop power suppliers are estimated to have an efficiency of 60% to 75%. 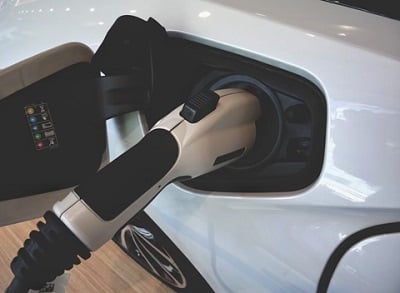 EV charging. Source: Possessed Photography/UnsplashThe primary lithium-ion battery can range from 48 V in hybrid vehicles to 400 and 800 V for purely electric vehicles. In both scenarios, a traction inverter, which is typically bi-directional, is used to convert DC from the battery to AC to power the drive motors; various onboard services would use DC-DC converters. The AC-DC charger is often bidirectional to allow for both charging and pushing the energy out to a home or for emergency use. These chargers also facilitate smart charging.

Semiconductor advancements have allowed EVs to become a viable option for consumers. New semiconductor materials such as gallium nitride (GaN) and silicon carbide (SiC), allow for more compact batteries and allow for the battery to operate at higher voltages. Wide-bandgap semiconductors offer lower energy losses and are often used in EV batteries for that reason. Applying lithium-ion batteries to EVs let them become a commercial reality from both performance and cost standpoints. As a result, battery improvement will directly contribute to innovative application in the EV industry.

Higher bandgap requirements demand stronger electric fields to overcome the bandgap, which allows devices to withstand higher voltages during operation. However, converting traction inverts from insulated-gate bipolar transistor (IGBT) technology may not provide the most prominent benefits. IGBTs can be efficient and durable with low costs but still require parallel diodes when used for motor drives and bi-directional capability. On-state losses and residual losses are reduced with SiC, which have an integral diode.

Power converters are essential to operate electronic devices and the power grid itself. Power converters all fall into two basic categories, ‘buck’, ‘boost’ and a combination of the two, ‘buck-boost’ converters.

Buck — A buck converter, or a step-down or forward converter, is a DC/DC switch power mode supply that is used to lower a DC input voltage. Buck converters have extremely high efficiencies that can exceed 95% and are often used to provide low-voltage power in applications such as microprocessors, communication equipment and control systems.

Boost — A boost converter, or step-up or flyback converter, is a DC/DC switch that increases DC power supply to a stabilized higher voltage. The output voltage is varied and the current is lowered. These are popular in battery devices. Both boost and buck converters rely on similar components such as an inductor, diode and power switch but under different arrangements.

The type of diodes used can influence the power conversion efficiency as these semiconductor devices allow for the one-way switch of current. Commonly in buck-boost converters, Schottky diodes have been favored due to their lower forward voltage drop and fast switching capabilities; however their reverse leakage current may be high and increases along with rises in temperature. Using alternative diodes may improve power conversion efficiency.

Switching transistors experience power losses in the turn-on and turn-off intervals and reducing the switching time reduces power consumption. The underlying concept of resonant converters is reminiscent of buck converters but are driven with a constant near 50% duty cycle, controlled dead time and anti-phase signals. The choice of semiconductor also affects the efficiency of LLC converters.

[Discover more about power converter technologies and suppliers on GlobalSpec.com]

With a history of notoriously low power conversion efficiencies, solar cells have received a lot of attention with their promise of a green future. Breakthrough research has shown improvements in perovskite/organic tandem solar cells with efficiencies of 23.6%, approaching the more common silicon solar cell conversion rate of 26.7%.

Jody Dascalu is a freelance writer in the technology and engineering niche. She studied in Canada and earned a Bachelor of Engineering. Jody has over five years of progressive supply chain work experience and is a business analyst. As an avid reader, she loves to research upcoming technologies and is an expert on a variety of topics.