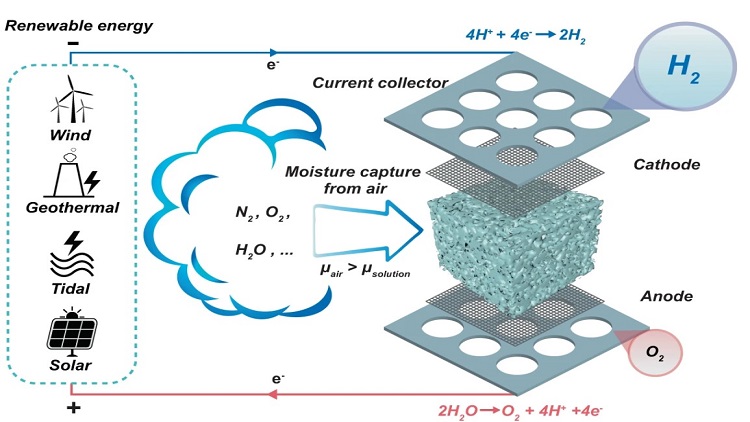 A schematic diagram of the DAE module with a water harvesting unit made of porous medium soaked with the hygroscopic ionic solution. Source: Nature Communications doi.org/10.1038/s41467-022-32652-y

The production of green hydrogen via renewable energy-driven electrolysis technology requires the availability of an adequate water supply, which is not accessible in many areas. To overcome this resource limitation, University of Melbourne (Australia) and the University of Manchester (U.K.) researchers turned to the exploitation of atmospheric humidity as a readily available source of water.

The Direct Air Electrolyzer (DAE) captures water directly from the air for subsequent processing in a standard electrolysis process. The freshwater trapped by a hygroscopic ionic solution is directed to an electrolysis system powered by solar or wind with a current density up to 574 mA/cm2. A prototype device operated for 12 consecutive days with a Faradaic efficiency of around 95%.

During an eight-month test period, a solar-powered DAE described in Nature Communications was demonstrated to operate effectively with humidity levels as low as 4% and to generate 3.7 m3 of high-purity hydrogen per day, per square meter of cathode

By harvesting hydrogen from air, the device decouples hydrogen production from geographic limitations of the world’s freshwater resources. This opens up access to places that will need it in the future and provides a range of economic and environmental benefits.