The Ocean Cleanup foundation will deploy a 100-meter-long barrier segment in the second quarter of 2016 in the North Sea, 23 km off the coast of The Netherlands, in one of the first open-water tests of a design intended to help remove plastic from the Pacific Ocean.

The concept uses natural ocean currents and winds to passively transport plastic toward a collection platform. Instead of using nets and vessels to remove the plastic from the water, solid floating barriers are used to minimize the chance of entangling sea life. 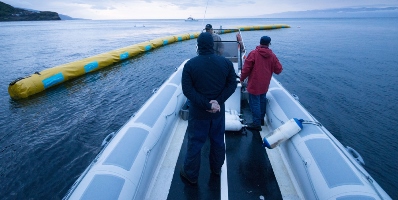 The concept uses natural ocean currents and winds. Image credit: The Ocean Cleanup.The main objective of the North Sea test is to monitor the effects of real-life sea conditions, with a focus on waves and currents. The motions of the barrier and the loads on the system will be monitored. The test is also designed to help engineers prepare for the Coastal Pilot, the group's first operational cleanup system planned for deployment off the coast of Tsushima Island, Japan, in the second half of 2016.

The technology uses a V-shaped array of floating barriers attached to the seabed to catch plastic deposited there by ocean currents.

Beneath the booms, a submerged non-permeable screen helps concentrate plastic that is suspended under the surface. Most of the current passes under the screen. This carries away all neutrally buoyant sea life and helps to prevent by-catch. The lighter-than-water plastic collects in front of the floating barriers.

A scalable array of floating barriers moves plastics toward the center of the structure like a funnel. This enables a central platform to extract and store the debris until it is transported to land for recycling. Intended for large-scale deployment, it is designed to harvest plastic from millions of square kilometers of ocean.

The plan is for a system 100 kilometers long to be deployed in 2020 in what is known as the Great Pacific Garbage Patch. Project engineers believe that by deploying the system for 10 years, almost half of the plastic within that zone could be removed.

By posting a comment you confirm that you have read and accept our Posting Rules and Terms of Use.
Advertisement
RELATED ARTICLES
Cleanup Systems Aim to Stem the Tide of Ocean Plastic Pollution
Video: Ocean Cleanup Project Ahead of Schedule
Study Finds That Floating Island of Plastic Debris in the Pacific Larger Than Previously Feared
Video: Ocean Cleanup devises new tools to trap plastic debris
Diver in Bali Captures Footage of Plastic Waste Overwhelming Ocean Waters
Advertisement