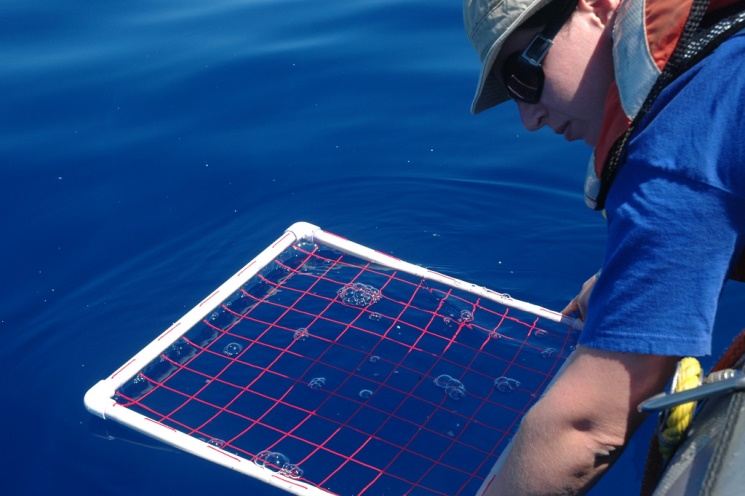 Although it’s difficult to calculate the total amount of debris in the ocean, oceanographers estimate that 8 million tons of plastic trash enters the water annually. That quantity likely will grow as demand for plastic-based consumer goods is expected to spike over the next decade, particularly in the Asia Pacific region already struggling with unmanaged plastic waste.

The Ocean Conservancy says that without immediate action, the seas could hold 1 pound of plastic for every 3 pounds of finfish by 2025. More plastic pollution equals more risk of entanglement and ingestion by marine animals. Many oceanographers and conservation organizations say that prevention is the fastest, most reliable method to stem the tide of plastics polluting the ocean’s ecosystem. However, several groups of scientists and engineers are exploring new ways to retrieve debris at sea. These large-scale debris removal projects use solid engineering principles yet leave marine debris experts questioning the impact on oceanic life, the disposal of the collected plastic trash and other unforeseen consequences.

Moving Cleanup to the High Seas

For decades, the most cost-effective and efficient method of debris removal has been shoreline cleanup in debris accumulation areas, says Nancy Wallace, program director for the U.S. National Oceanic and Atmospheric Administration’s (NOAA’s) Marine Debris Program. On these beaches, trash is collected before it can break down into smaller pieces such as those commonly found in open-ocean gyres, or large systems of rotating currents. 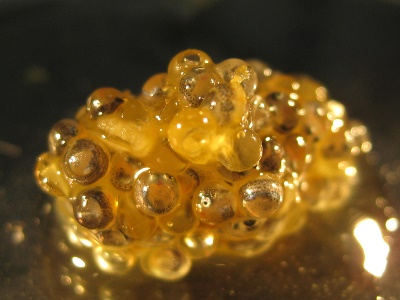 Of even greater concern is whether the cleanup array can distinguish between plastic debris and organisms such as plankton and fish eggs.To prevent consumer waste such as plastic bottles and bags from reaching the coasts, municipalities have deployed trash capture technologies in some watersheds. These include storm drain inlet devices such as connector pipe screens, inline netting within pipes, hydrodynamic separators and trash booms.Cleanup methods also depend on the type of waste. Removing large debris such as vessels, docks, large appliances or large nets “often requires heavy machinery and manpower, as well as a plan for disposing of it once it’s on land,” Wallace says. She also points to the recovery method for derelict fishing gear, which can be detected via side-scan sonar and retrieved using various types of hooks.

Until recently, approaches for large-scale plastic cleanup in the open ocean have been relegated to sketches on napkins. But a group known as the Ocean Cleanup will deploy in spring 2016 the first open water test of its barrier design in the North Sea 23 km from the Netherlands. The organization developed a scalable V-shaped array of barriers that passively catch plastic using ocean currents and winds. Beneath these barriers or “booms” a submerged non-permeable screen helps concentrate plastic suspended under the surface. Most of the currents will run beneath the screens. The project team says this feature will prevent so-called “bycatch” by carrying away all neutrally buoyant sea life.

The Ocean Cleanup’s first operational system is slated to deploy off the coast of Tsushima Island, Japan, in the second half of 2016. By 2020, the company plans to send out a 100-km-long array into the North Pacific Subtropical Gyre, home to the so-called Great Pacific Garbage Patch. The project’s ultimate objective is to harvest plastic from millions of square kilometers of open ocean.

Another recently announced project from a UK company proposes an autonomous vessel that collects floating plastic debris as it zooms through the seas. On-board wind turbines and solar panels will power the 140-foot-long trimaran known as the SeaVax. The concept exists only as a one-twentieth scale model as its creators seek to finance a vessel for testing.

The Ocean Cleanup has gained both fans and critics since it was announced in 2013. Jennifer Brandon says that the project solves some of the problems evident in other large-scale trash removal methods, but introduces other challenges. 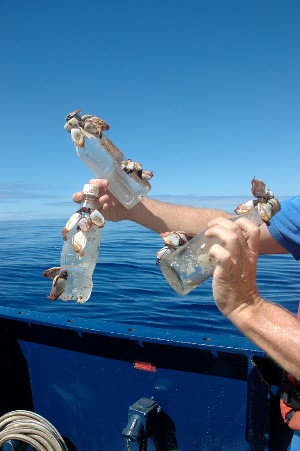 Biological inhabitants attach to three plastic bottles retrieved from the North Pacific Ocean Gyre. Source: Scripps Institution of Oceanography.“The best idea of their whole plan is anchoring in one spot and letting the current do a lot of the work for them,” says Brandon. She is a graduate student researcher specializing in marine micro debris at Scripps Institution of Oceanography at the University of California San Diego. The system also surpasses “any-boat based cleanup method, which requires so much fuel and manpower going back and forth across the garbage patch,” she says.

One of the primary complications Brandon sees with open ocean cleanup is biofouling. “Anything you leave in the ocean, even for a small amount of time, immediately gets colonized,” she says. Because this biofouling makes things heavier, the process could weigh down the array’s barriers to the point of breaking.

Of even greater concern is whether the cleanup array can distinguish between plastic debris and organisms such as plankton and fish eggs. “Those things are so essential to the ecosystem of the entire ocean that it would do more harm than good to sort them out with the plastic,” Brandon says.

Some of the most damaging plastic waste is hard to detect with the human eye, let alone impossible to capture. These so-called microplastics come from three primary sources: microbeads are the miniscule plastic particles that add texture to soap, toothpaste and more; nurdles are the particles that act as raw material in producing plastic goods; and larger plastics degrading into smaller, irregular pieces also plague the ocean. Fish often mistake these microplastics for food.

To further outline potential challenges, marine debris researchers have produced a guidance document for prospective inventors of plastic-capture systems. The document recommends that designers account for strength and stability in extreme sea conditions, detectability by other vessels, legal issues and more.

Where Does the Waste Go?

Because no one “owns” the ocean, no one technically owns the trash collected from it either. Often the burden falls to the country where the marine debris washes ashore, even though that country may have produced very little of it, says Scripps’ Brandon. Waste management also varies from country to country and the municipalities within it. Some areas still lack the waste infrastructure not only to manage the plastic debris but also to prevent it from reentering the waterways and oceans.

In the case of coastal cleanups, where collected trash ends up depends on what is in it and where it is removed, says Allison Schutes, senior manager for the Ocean Conservancy’s Trash Free Seas program. She cites a “significant effort” among many places across the U.S. and elsewhere to keep as much of the trash out of landfills as possible. In areas with robust recycling programs, volunteers and municipality employees sort recyclables and non-recyclables. This helps ensure that much of the glass, metal and plastic collected are sent to local material recovery facilities, Schutes says.

Not all plastic trash can be recycled, however. “You need a high-quality plastic in order to recycle, and often that’s not the case because these plastics have been baking in the sun,” Brandon says.

When removing big pieces of debris such as abandoned vessels and commercial fishing gear, state and federal governments intervene as a matter of public health and safety. NOAA has identified best practices for cleaning, dismantling and disposing of derelict boats. These practices include vessel donation and turn-in programs, artificial reefing and recycling or scrapping.

Unique methods to reuse this debris are emerging. One example is the Fishing for Energy partnership between the NOAA Marine Debris Program, Covanta Energy and Schnitzer Steel administered by the National Fish and Wildlife Foundation. The program features collection ports in marinas in nine states where old and damaged fishing gear may be discarded. Steel from the gear is recycled and the remaining line, rope and nets are used for energy production.

The rules for large-scale open ocean cleanup projects, by contrast, are a bit muddier because debris disposal of this magnitude is unprecedented. The Ocean Cleanup array funnels plastics toward its center, which allows a central platform to extract and store the plastic until a ship can transport it to land for recycling. When the system is fully deployed, project engineers expect a daily collection rate of 65 m³. This requires waste pickup every 45 days. The group expects a yearly cost of €1 million ($1.1 million), or €0.14 per kg plastic, to transport the garbage to land.

The project team has not yet indicated which country or countries will accept the trash. It is also unclear who’s responsible for sorting the plastics, a potentially labor-intensive task if organic materials like barnacles are attached to or entangled in the plastic. The company points to two possible outlets for the recovered refuse. Tests have shown that the waste plastic can be converted to oil through a process called pyrolysis, a chemical reaction in which large molecules are broken down into smaller ones. Additionally, more than 30 companies have shown interest in buying the plastic, which “we have shown is of surprisingly good quality and can be turned into high-quality projects,” says Lotte de Groot, an Ocean Cleanup spokesperson.

NOAA’s Wallace says that new technologies for marine debris removal may play an important role in the future. Until then, she says, “it is important that we continue to work to prevent marine debris from entering the ocean in the first place.”

By posting a comment you confirm that you have read and accept our Posting Rules and Terms of Use.
Advertisement
RELATED ARTICLES
Cleanup Set to Begin at the Great Pacific Garbage Patch
Device Designed to Clean Up The Great Pacific Garbage Patch Isn't Working
Study Finds That Floating Island of Plastic Debris in the Pacific Larger Than Previously Feared
Project aims to clean plastic from ocean seabed using connected autonomous vehicles
Video: Ocean Cleanup devises new tools to trap plastic debris
Advertisement