Scientists at Loughborough University in the U.K. have developed a method for determining whether fingerprints found on a document were left on the paper before or after text was printed on it.

The technology reportedly has implications for resolving cases of fraud wherein a defendant claims to have no knowledge of a document in question but admits to handling paper ahead of printing text upon it — with the defendant, for instance, claiming to have handled the paper in the process of loading it into equipment. 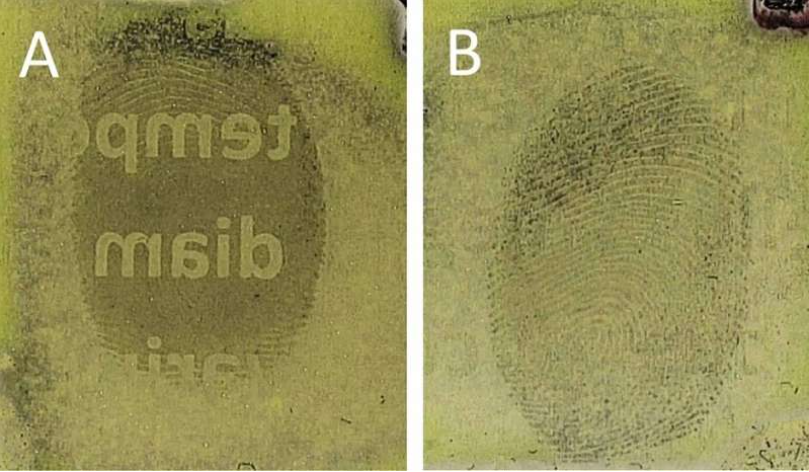 The fingerprint will then appear either masked (A) if put down before the text was printed on the paper or complete (B) if put down after the text had been printed. Source: Loughborough University

As part of the new technique, researchers placed a thin layer of gelatin lifters — a common forensics tool — over any fingerprints overlapping printed text. The researchers then peeled the thin gelatin layer away from the document and placed it in a sealed vacuum chamber filled with disulfur dinitride vapor, which reportedly reacts with the sample.

According to the researchers, fingerprints will appear either masked if they were left before the text was printed on the paper or complete if left after the text had been printed.

This technique improves upon current development techniques, which only reveal the presence of fingerprints, and not when they were left, the researchers explained. Likewise, the researchers believe that because the technique is non-destructive it can be used to test rare documents or artifacts that are expensive or historically significant without causing any damage.

Additionally, the technique can be used again for further forensic testing as it does not destroy the fingerprints on the document.

An article detailing the findings, "A preliminary investigation of a two-step, non-invasive process to determine chronological deposition order of fingerprints and printed ink on paper," appears in the journal Scientific Reports.