A research team from the Leibniz Institute for Food Systems Biology at the Technical University of Munich (LSB) has succeeded in automating an established method for the isolation of volatile food ingredients.

The optimized method is particularly important for odorant analysis. Odorants contribute significantly to the sensory profile of food and have a major influence on eating pleasure. Knowing the key odorants that shape the aroma of a food is therefore of interest both for analytical quality control and for targeted product development in the food industry. 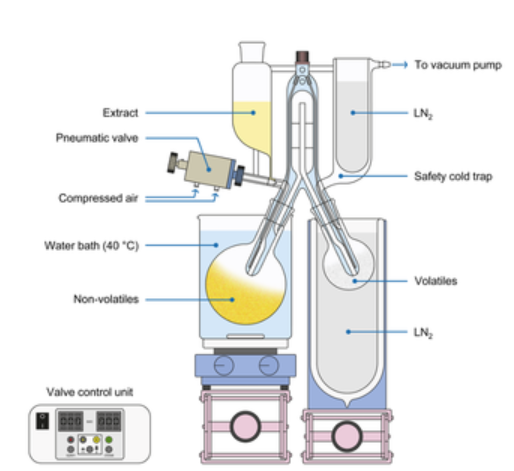 However, isolating volatile compounds from food is not trivial. Many established methods lead to losses of labile odorants as well as to odor-active artifacts and are therefore unsuitable for odorant research. The manual SAFE technique developed in 1999 made it possible for the first time to easily isolate even thermally labile odorants from food without artifact formation. "This is an important prerequisite for using further analytical methods to identify the key odorants," said Philipp Schlumpberger, who contributed to the study.

Today, manual SAFE is established worldwide as a standard procedure in aroma research. Nevertheless, the research team saw a need for optimization in ease of use, in the yields achieved, and in reducing the risk of transferring nonvolatile material, which can significantly interfere with subsequent analytical steps.

"As we discovered, the problems are mainly associated with the manual operation of the valve on the dropping funnel. Therefore, we replaced it with an electronically controlled pneumatic valve. To fully automate the SAFE apparatus, we optionally extended it with an automatic liquid nitrogen refill system as well as an endpoint detection and shutdown system," explained Martin Steinhaus, section and working group leader at LSB.

As the team's study now shows, the installation of the automatic valve increased yields, particularly for lipid-rich food extracts and for odorants with comparatively high boiling points. In addition, operator errors, which can lead to contamination of isolates with nonvolatile substances in the manual version, are eliminated with the automated SAFE.

The study, Development and evaluation of an automated solvent-assisted flavour evaporation (aSAFE), appears in the journal European Food Research and Technology.

By posting a comment you confirm that you have read and accept our Posting Rules and Terms of Use.
Advertisement
RELATED ARTICLES
Technique "sniffs" out fraudulent foods
Pineapple waste could be used for food packaging
AI algorithm predicts chemical smell's attractiveness for food and fragrance industries
Ferroelectric, Flexible Thin Films for Nonvolatile Memory Devices
A better way for brewers to find thiols in hoppy beers
Advertisement