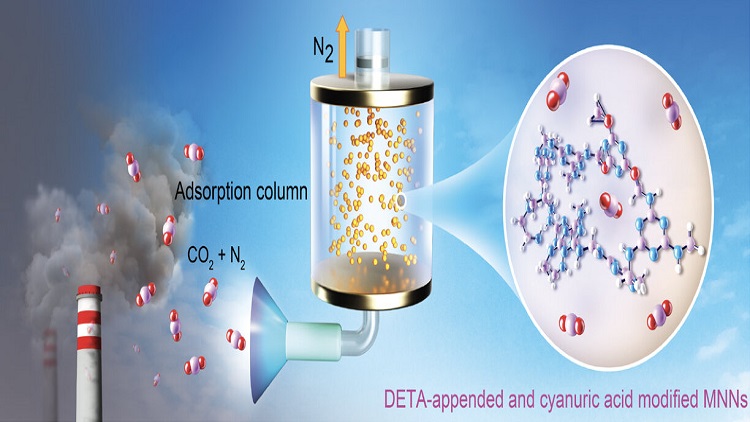 The material adsorbs carbon dioxide quickly and releases it for sequestration when slightly heated. Source: Haiyan Mao and Jeffrey Reimer/University of California Berkeley

Off-the-shelf melamine powder forms the basis of an inexpensive material that could be of value on curbing carbon emissions. The melamine-based material is also easier to fabricate and is more energy efficient than most metal-oxide frameworks developed for this application.

Researchers from the University of California Berkeley, Stanford University, Texas A&M University and U.S. Lawrence Berkeley National Laboratory combined melamine powder with formaldehyde and cyanuric acid, followed by use of a three- to seven-day condensation polymerization technique. A sonication bath and a cleaning process then resulted in the formation of stabilized melamine nanoporous networks.

As reported in Science Advances, these networks demonstrated a high adsorption capacity of 1.82 millimoles of carbon dioxide/g at atmospheric pressure levels. The new material was documented to capture carbon dioxide at about 40° C (104° F) and release it at 80° C (176° F)

The reusable material can be scaled for high-capacity carbon dioxide capture from industrial facilities as well as vehicle tailpipes.