Eugene Chen, professor of chemistry, and postdoctoral fellow Miao Hong synthesized a polyester that, when reheated, converts to its original molecular state and is ready for reuse.

To create a fully recyclable polymer, the researchers' feedstock was a biorenewable monomer that textbooks and journal papers had declared non-polymerizable. That means it could not be bonded into the size of molecules typically required for use as a material. Gamma-butyrolactone, or GBL, is a colorless liquid and common chemical reagent derived from a top-12 biomass compound best suited to replace petrochemicals, according to the U.S. Department of Energy. 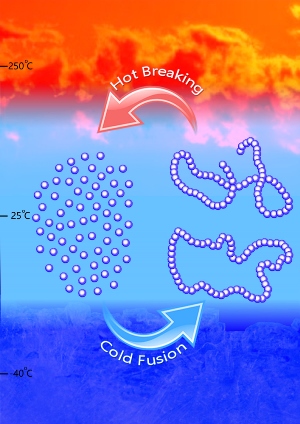 Illustration of the researchers’ polymer-synthesis process. Image credit: Jing Tang/Chen lab.The accepted wisdom was that these molecules were too thermally stable in their monomeric chemical states to polymerize. Not only did they make a polymer, but Chen and Hong learned how to get the polymers to take different shapes, such as linear or cyclic, based on the catalysts and conditions they selected. For their experiments, they used both metal-based and metal-free catalysts to synthesize the polymer, called poly(GBL). This polymer is chemically equivalent to a commercial biomaterial called poly(4-hydroxybutyrate), or P4HB.

They used specifically designed reaction conditions, including low temperature to make the polymer and then heating between 220-300 degrees Celsius to convert it back into the original monomer, demonstrating its thermal recyclability.

P4HB is derived from bacteria, which is a more expensive, complex process compared to how most plastics are made. By starting with the readily available GBL and ending up with a replacement material for P4HB, Chen’s discovery has promising market potential, and a provisional patent has been filed.