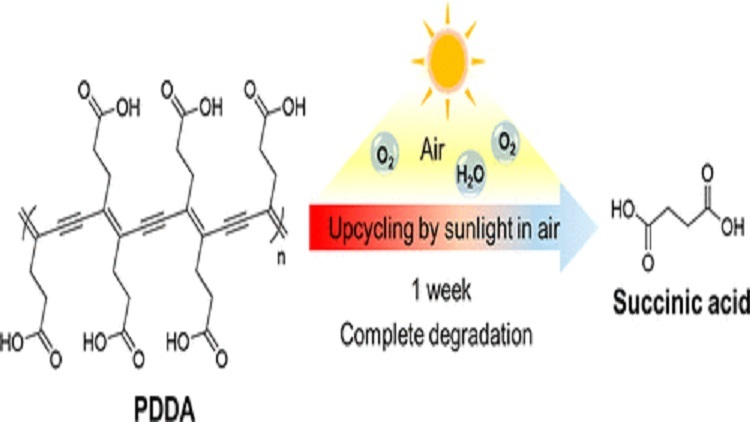 The material decomposes in about one week in sunlight from a petroleum-based polymer into succinic acid. Source: Liang Luo et al.

A possible solution to persistent plastic pollution has been advanced by researchers in China. A new material decomposes in about one week in sunlight from a petroleum-based polymer into succinic acid, a naturally occurring nontoxic small molecule that will not contribute microplastic fragments in the environment.

The inclusion of the environmentally degradable polymer, poly(deca-4,6-diynedioic acid) (PDDA) as a minor ingredient, or with other biodegradable polymers, in plastic formulations could help speed breakdown of these materials in landfills. The flexible PDDA would also be potentially useful inside electronics: sealed inside a cell phone or other electronic device, the polymer could last for years isolated from light and oxygen while simplifying disposal at the end of device service life. The byproduct succinic acid could be upcycled for commercial uses in the pharmaceutical and food industries.

The rapid degradation was confirmed by nuclear magnetic resonance measurements, which documented two NMR peaks corresponding to chains of polymers and a single sharp peak after exposure to sunlight, which corresponds to the structure of succinic acid formed during the degradation reaction. The process exemplifies photo-oxidative degradation, in which sunlight irradiation breaks the polymer’s double- and triple-bonded carbon backbone.

By posting a comment you confirm that you have read and accept our Posting Rules and Terms of Use.
Re: Plastic polymer quickly degrades in sunlight
#1

"isolated from light and oxygen". So if it's isolated, or encapsulated in a protective coating of perhaps a resin or varnish, just how is it going to 'evaporate' to 'nothing' and be safe?