A Swedish man is alive due to an autonomous drone that delivered critical equipment just in the nick of time.

In January, while he was out shoveling snow in Trollhättan, Sweden, a man was stricken by a heart attack. A doctor was driving past on his way to work, when he noticed the 71-year-old laying in his driveway. While he was performing CPR on the patient, the doctor noticed a whirring drone hovering overhead. The drone swooped in with a defibrillator, which the doctor used to resuscitate the patient.

Suffice it to say, it was that snow shoveler's lucky day. Yet, this wasn't complete happenstance. Flying defibrillators, which bring life saving equipment at a moment's notice to far reaches, are only becoming more common.

This incident has raised hope and awareness on how technology like this can be used more frequently in similar situations.

More than 350,000 people in the United States and 275,000 people in Europe every year suffer Out of Hospital Cardiac Arrest (OHCA) annually. Up to 70% of these incidents happen in houses that do not have defibrillators, and the response times of ambulances can often be too long. The patient's odds of survival go down 7% to 10% each passing minute without medical intervention, so time is extremely important.

In response, a Swedish company called Everdrone developed a service drone that they call the Emergency Medical Aerial Delivery (EMADE) drone. This project was carried out as a partnership with the Center for Resuscitation Science at Karolinska Institute.

The drone is integrated with local emergency response call centers. When an emergency call comes in that is suspected to be due to a heart attack, the drone takes off and can often beat an ambulance to the scene. The drone flies and navigates autonomously, but there is a pilot in control for take-offs and landings.

Everdrone is conducting a four-month long trial in 2022 as a proof of concept. So far, the drone responded successfully to 12 of 53 possible heart attack events. It delivered the defibrillator in 11 of those instances, and in seven cases the drone beat the ambulance, with an average response time of less than two minutes.

None of the defibrillators in the proof-of-concept were used without emergency medical technicians in response. Everdrone acknowledges there are some kinks still. Weather can easily ground a flight, so a more purpose-built drone, with better weatherability, will make the system more effective. Additionally, there is no guarantee that a defibrillator delivered by drone will make it into knowledgeable hands. Everdrone said that instructions from the call center operator will be critical in most situations.

There is hope that it can drastically improve the current survival rate of OHCA, which is just 10%. This service has been deployed across Sweden and currently covers 200,000 people. Everdrone hopes to expand across Europe, and with the popularity of drone technology, and this first patient saved, it will be a welcome addition to many communities.

Beyond Sweden, beyond defibrillators 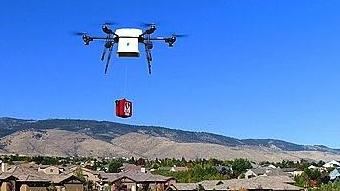 This system, from Flirtey, was set to deploy in Reno, Nevada, in 2021. Source: Mollyrose89/CC BY-SA 4.0 Everdrone is not the only company in pursuit of delivering defibrillators via drones. The concept has been approved for Reno, Nevada, as well. A similar system is being explored in Denver.

It is also likely that the drone's cargo will expand beyond defibrillators. Medications are another potential avenue. It would be the optimal solution to deliver, say, an anti-venom to a snake bite patient in the forest or outback. It could also be used to deliver organs for transplant, quickly and effectively. Scale the drone up enough and it could even evacuate a patient in a serious emergency.

Of course, these are more possibilities than anything. But certain within reason once some of the main hurdles of drones for medical response are cleared.

Regulations and future use

One of those hurdles is of course regulations. The U.S. Federal Aviation Authority tightly restricts drones for commercial use and operators for beyond-line-of-sight flights are very few in number. It will take a combined effort from the medical industry and the FAA to come to a solution where safety and medical response can both be satisfied.

However, once that occurs, there is the potential that many lives can be saved. The difference that drones can make might just be the difference between life and death for many in the future.

What are your thoughts on the life-saving drone and drones being used in healthcare in general? Engineering360 would love to hear your thoughts in the comments below!

By posting a comment you confirm that you have read and accept our Posting Rules and Terms of Use.
Advertisement
RELATED ARTICLES
Dawn of the Drones (March 6-12)
Ship-to-Shore Drone Delivery to Demonstrate Lifesaving Aid Capability
Birds vs. Drones: Engineering and Nature Collide
Team builds drone inspired by the pufferfish
How technology is being used to combat the coronavirus
Advertisement