Types of Diodes, Their Characteristics and Applications 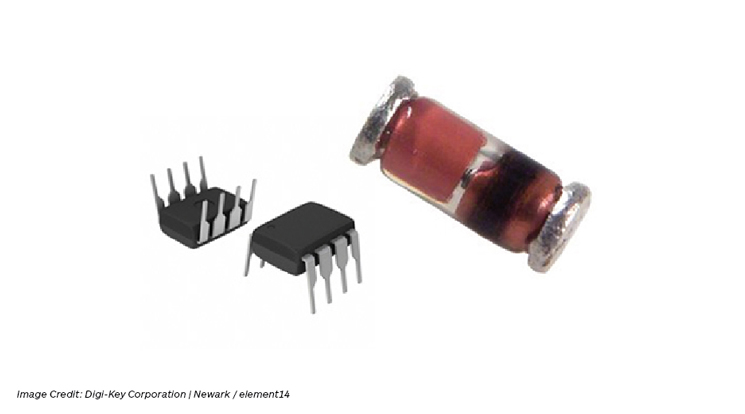 A semiconductor diode is a non-linear device whose most outstanding feature is the fact that, basically, current is only allowed to flow in one direction. The diode is built by joining together two semiconductor materials: an N-type material (rich in negative carriers or free electrons) and a P-type material (rich in positive carriers or holes). The area of contact is called the junction. For this reason the diode is commonly referred to as a PN Junction.

When an applied voltage forces the diode to conduct electrons from the anode to the cathode it is operating in a forward bias condition. When the applied potential does not allow for a sharp increase in current and only a minimal amount, practically zero, of current is observed across the junction, the diode is said to be in a reverse bias condition. When forward biased the diode behaves much like a closed switch, and when reverse biased the diode behaves like an open switch.

(Find diodes by Specification or see the Engineering360 Directory of suppliers.)

The following schematic symbol is used to represent a diode: 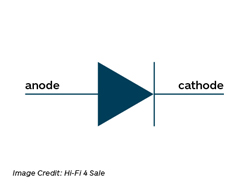 
The following figure shows the forward and reversed biasing of a diode connected to a circuit. 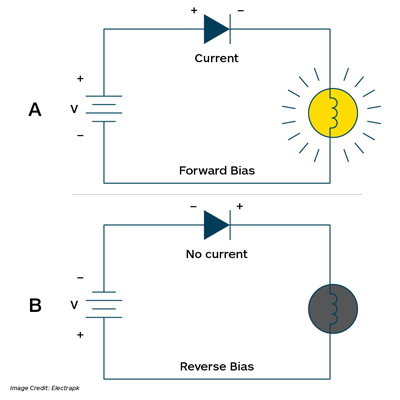 The typical I-V characteristics of a diode are illustrated by the following figure. There are two operating regions that are clearly labeled: the forward bias region and the reverse bias region. Two scales are used along each axis to depict the varied response of the diode both in the positive and negative directions. A forward biased current in this particular I-V curve is expressed in milli-amps (mA), whereas in the reverse bias region the current is expressed in micro-amps (μA). The main features of these two operating conditions are explained below. 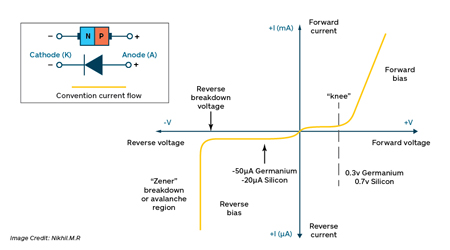 In the reverse bias region there also exists two important areas that can be distinguished in relation to the amount of the current observed through the diode. The current through the diode is very small, practically zero, when the diode voltage is between zero and the breakdown voltage (VBD). Beyond the breakdown voltage (VBD) there is an abrupt increase in current, which marks the second area of interest in the reverse bias region.

The breakdown voltage is not a constant value like the threshold voltage in forward bias. VBD is different for each diode. This value is a specification parameter given by the manufacturer. 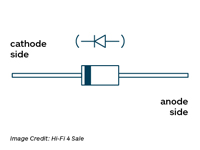 The term diode can be used to describe a typical PN diode, also known as a general purpose diode, or it may be used as a broader term to describe one of many other types of diodes. A specific type of diode may be used for a particular application or exhibit a specific behavior or characteristic. The following descriptions and illustrations cover a short list of common and special purpose diodes. 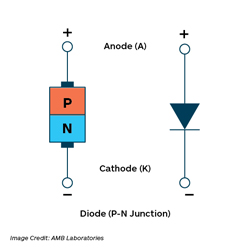 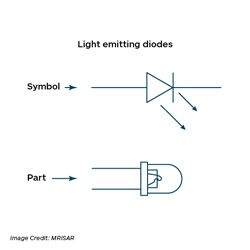 Light emitting diodes (LEDs) are PN junction devices that give off light radiation through electroluminescence when forward biased. They are used as various indicators in aviation, automotive and traffic lighting, as well as lighting for some lamps and torches. Most light emitting diodes function in the near infrared and visible ranges, though there are now UV LEDs as well. 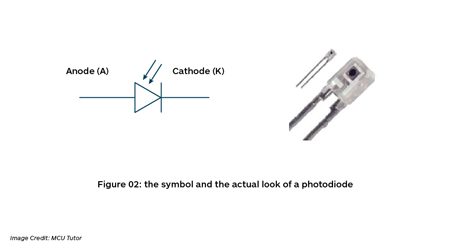 PIN diodes are three-layer semiconductor diodes consisting of an intrinsic layer separating heavily doped P and N layers. The charge stored in the intrinsic layer in conjunction with other diode parameters determines the resistance of the diode at RF and microwave frequencies. This resistance typically ranges from kilohms to less than 1 ohm for a given diode. PIN diodes are typically used as switches or attenuator elements. 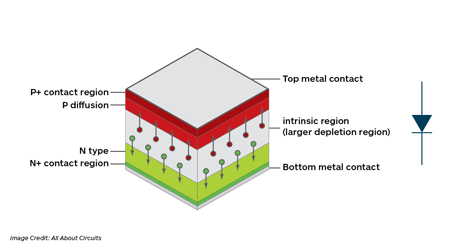 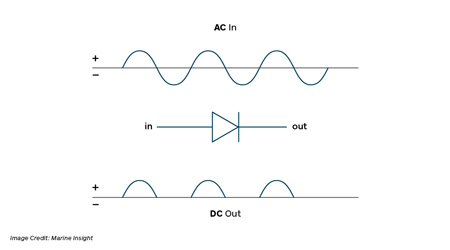 Rectifiers receive an alternating current (AC) with an average value of zero volts and supply a direct current (DC), single polarity signal with a net value greater than zero volts, a process otherwise known as rectification. The essential component in a rectifier is the diode. The diode is an electronic component that allows current to flow in only one direction, from an anode (+) to a cathode (-). A single rectifier diode will only allow half of an AC signal to propagate while blocking the reverse polarity so long as it does not exceed the breakdown voltage. Several circuits are available that allow for half-wave and full-wave rectification. 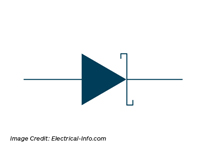 Schottky diodes are also known as Schottky barrier diodes or hot-carrier diodes. They consist of a junction between a metal layer and a semiconductor element. The metal layer, a cathode, is heavily occupied with conduction-band electrons. The semiconductor element, an anode, is a lightly doped N-type semiconductor. When forward-biased the higher energy electrons in the N region are injected into the metal region allowing the junction to operate in the ON state. Schottky diodes achieve high switching speeds as they give up their excess energy very rapidly as they fluctuate between ON and OFF states. 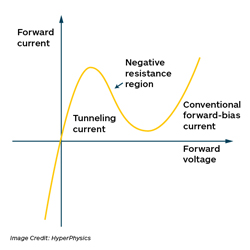 Tunnel diodes are heavily doped P-N diodes in which electron tunneling from the conduction band in the N-type material to the valence band in the P-type region produces a region of negative resistance. This negative-resistance region is the most important area of operation. As the voltage is increased, the current decreases. This feature makes tunneling diodes especially useful in low power oscillators and radio frequency (RF) applications.

Varactor diodes are p-n junction diodes that are designed to act as a voltage-controlled capacitor when operated under reverse bias. When a PN junction is biased by applying a voltage to the junction, it results in a negative charge on the P side and positive charge on the N side. The region between these positive and negative charges, known as the depletion region, does not contain any moving charges.

The inherent capacitance is the resultant from the biased junction: two opposing charges separated by an insulator. In fact, all PN junctions have an associated capacitance (Cj) and when voltage is applied to the diode, the depletion region decreases (forward bias) or increases (reverse bias), changing the value of the PN junction capacitance. 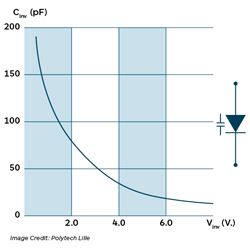 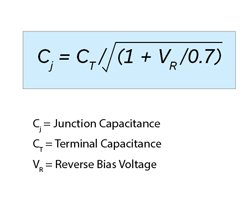 Zener diodes are PN junction devices that are designed to operate in the reverse-breakdown region. The breakdown voltage (Vz) of Zener diodes is set by carefully controlling the doping level during manufacture. This breakdown phenomenon is referred to as the Zener voltage or the Zener effect. 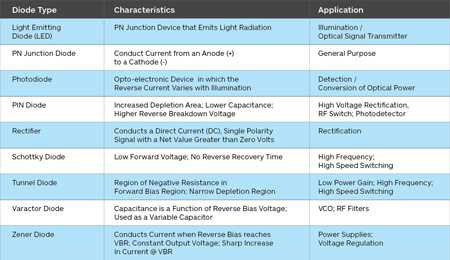 Diodes follow product lifecycle stages that are defined by the Electronic Industries Alliance (EIA) in EIA-724. The six distinct phases of a product's life cycle recognized by EIA-724 are: Introduction, Growth, Maturity, Saturation, Decline, and Phase Out. 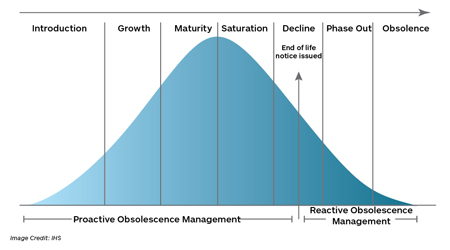 Restriction of Hazardous Substances (RoHS) is a European Union (EU) directive that requires all manufacturers of electronic and electrical equipment sold in Europe to demonstrate that their products contain only minimal levels of the following hazardous substances: lead, mercury, cadmium, hexavalent chromium, polybrominated biphenyl and polybrominated diphenyl ether. RoHS became effective on July 1, 2006.

By posting a comment you confirm that you have read and accept our Posting Rules and Terms of Use.
Advertisement
RELATED ARTICLES
Diode Harvests Ambient Infrared Energy
Where semiconductors and welding intersect
Protecting the brains of Industry 4.0: Stay connected and in control of your future factories
Tips to improve power conversion efficiency
Method Captures Wasted Energy
Advertisement