An electrically charged, thin-film patch designed to expedite wound healing has been developed by a team from the University of Electronic Science and Technology of China.

Relying on electricity to expedite wound healing, the thin film patch consists of four layers: the top and bottom layers feature electrically charged plastic that receives a charge via contact with the wearer’s skin; one middle layer of silicone rubber gel that enables the patch to conform to the contours of the wearer’s skin; and the other middle layer that features a shape memory alloy material that pulls the sides of the wound closer. 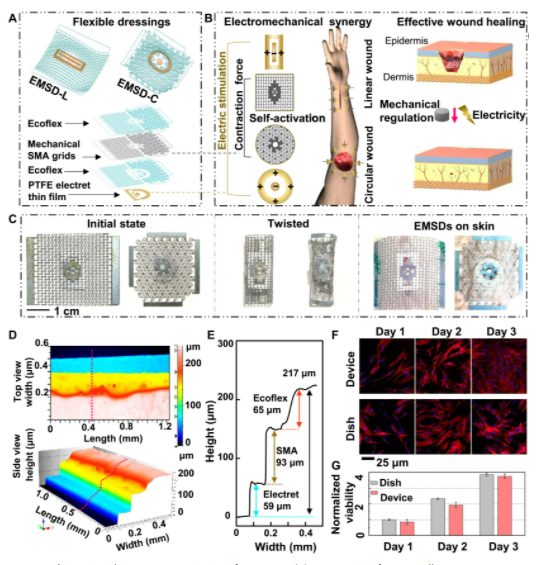 Source: University of Electronic Science and Technology of China

In the lab, the researchers applied the 0.2 mm thick film to both circular and straight-line wounds on rats, determining that the film demonstrated significantly faster wound healing when compared to results achieved using other wound dressings or no dressings at all.

On circular wounds treated with the patch, for instance, 96.8% healed after eight days, versus 76.4% to 79.9% healed with other dressings. Meanwhile, those that were untreated were only 45.9% healed, according to the researchers. The results were reportedly similar for straight-line wounds.

The article, A programmable and skin temperature-activated electromechanical synergistic dressing for effective wound healing, appears in the journal Science Advances.