Although 3D printing was first developed in 1984, it wasn't until more recent years that it took off. Thousands of videos and articles can now be found on the web showing people utilizing 3D printers to create everything from aircraft components and artificial organs to earrings and action figures. But all these types of 3D printing have something in common: they pose a risk to the health of those who use them.

UFPs are released into the air throughout the 3D printing process. These UFPs are incredibly small, making them invisible to the eye. Additionally, their small size makes them a threat for a longer amount of time than one might think. While bigger particles tend to settle rather quickly after they have been emitted, UFPs are so small and light that they can remain airborne for up to 48 hours. Because they are in the air so long, they have a much higher chance of being inhaled by the printer's operator and anyone in the near vicinity for extended periods.

Because UFPs are so small and easily inhaled, they can rapidly enter the lungs or other tissue and lodge deep within causing discomfort and potentially other problems. It has been widely reported that inhalation of UFPs is closely associated with cardiovascular disease; in one study, it was even stated that the relation between long-term exposure to UFPs and the incidence of cardiovascular and cerebrovascular disease may be underestimated.

The second significant hazard posed by 3D printing is the emission of VOCs, described as the fumes emitted during 3D printing with certain filaments, like acrylonitrile butadiene styrene (ABS) or polylactic acid (PLA). Often these fumes are noticeable and can be smelled. Other times, the 3D-printing process can be odorless but is not necessarily any less dangerous.

Inhaling VOCs over the short term isn't always hazardous; VOCs can be produced even when cooking up dinner. The problem for 3D-printing arises when one considers that printers are often in use for hours and hours at a time. Anyone working near one will be exposed to the VOCs produced for their entire work day, day after day. This is potentially harmful and can cause discomfort and even significant health challenges.

According to HealthLink BC, low dosages of VOCs, "can cause eye, nose and throat irritation, shortness of breath, headaches, fatigue, nausea, dizziness and skin problems....Long-term exposure may also cause damage to the liver, kidneys or central nervous system." VOC exposure has even caused cancer in some cases. Not all people will have the same reactions but especially people with respiratory issues, such as asthma, must be extra cautious when being exposed to VOCs on a routine basis.

How to protect yourself 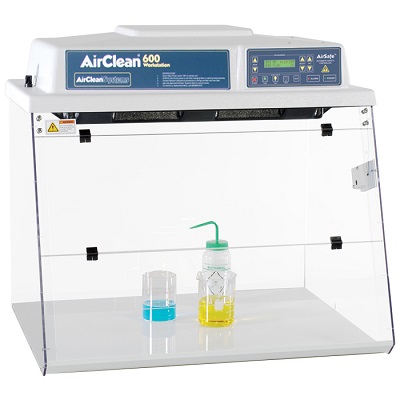 Source: AirClean SystemsWhile it is possible in some cases to operate 3D printers outdoors or in locations with excellent ventilation, this is not usually the case. So what can one do to minimize the risks presented by working with and around 3D printers?

According to a study published by the Illinois Institute of Technology, "The most effective control strategies for reducing both UFP and VOC concentrations included installing a high-flow spot ventilation system and operating the printer in a sealed enclosure with high-efficiency gas and particle filtration."

The perfect solution to reduce the hazards of UFPs and VOCs is a ductless hood. Because of the versatility and variety available in ductless hoods, they are appropriate for everyone using 3D printers, from hobbyists printing at home to major manufacturing companies that use dozens of printers at a time.

AirClean Systems offers a wide array of products that can suit user's needs. Some are as small as a benchtop enclosure, like our AC600 Series ductless chemical workstation, or customers can work with the experienced sales team and engineers to create a solution as big as a room. Hoods and enclosures from AirClean Systems can combine both HEPA and bonded carbon filtration, protecting operators from both UFPs and VOCs in just one highly effective and user-friendly unit.

By posting a comment you confirm that you have read and accept our Posting Rules and Terms of Use.
Re: Hazards of 3D printing
#1

Thanks! Similar article needed for LED lights and hazards to eyes. Dry eye syndrome and related problems are booming!