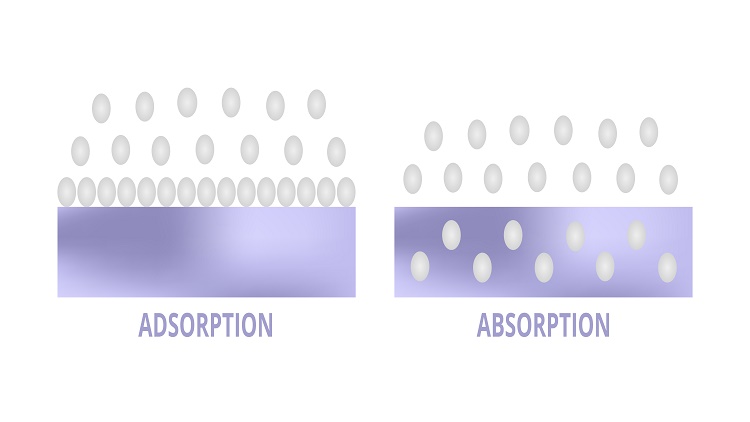 There has been a recent breakthrough in surface science: a completely new active mechanism of adsorption has been discovered. Adsorption is the phenomenon where molecules are attracted onto a solid surface, and this particular phenomenon is critical for energy storage, environmental remediation and catalysts.

Researchers have demonstrated how artificial molecular machines (molecular synthetic components that provide movements similar to machines) can actively recruit molecules onto a surface when grafted onto the surface itself. This can occur at extremely high concentrations, enabling an increase in energy storage capacity.

This new adsorption mechanism, known as mechanisorption, is a result of non-equilibrium pumping and the formation of mechanical bonds between the adsorbate (molecules) and the adsorbent (surface). Mechanisorption utilizes redox (reduction and then oxidation) along with acid-based chemistry to desorb and adsorb a number of rings on and off of a 2D, solid-state metal-organic framework (MOF) surface. In these specific tests, the molecules attracted to the surface were rings, but once the rings are optimized the scientists believe that they can attract other molecules.

This might sound a bit abstract as there are lots of technical terms and processes that are hard to visualize; however, there is great importance behind this new research. The breakthrough is the first innovation and fundamental advance in surface chemistry since chemisorption and physisorption (equilibrium-based phenomena) in the 1930s. It is believed that mechanisorption will be so important that it will emerge as a prominent technology if it can be integrated into active structures. It will bring the storage of gases like carbon dioxide, methane and hydrogen to another level.

This is a perfect example of how theory and experiment can come together to provide great results. A pumping cassette was chosen to be used for this experiment due to the effect of membrane-bound enzymes subjected to oscillating electric fields. A pumping cassette can be understood as a “valley” in which the floor can be moved up and down. The sides of the valley can also be raised up and down to encourage molecules to move in the desired direction. This device was used with rotaxanes (long, molecules shaped like dumbbells) swimming around in a solution, and polymer chains where rings are gathered one at a time after every redox cycle. This type of pumping cassette can be integrated into many different polymer chains, allowing them to be used in diverse applications.

Mechanisorption will greatly affect controlled release and the storage of different molecules. The research discussed in this article addresses the attraction of ring molecules to a solid surface, but it is expected that this technology can be used to attract many different molecules to surfaces at a high concentration. The mechanisorption mechanism bears some similarities to spray cans, in which various materials are kept at high pressure and then released by activating a trigger. The substances in mechanisorption stay in mechanical equilibrium, however, and if they are packaged far from thermodynamic equilibrium. The triggered release mechanism is basically diffusion and is extremely fast within these systems.

Adsorption is typically considered to be a more passive process where the adsorbate travels from a high to low concentration area, and the concentration of the surface adsorbate is dependent on the direction of equilibrium. However, with this new technology active adsorption can be created with the artificial molecular machines.

There are many applications as discussed above for mechanisorption, such as chemical capacitors, where the technology will alter the way information, matter and energy are manipulated and stored on their surface. The rise of the mechanical bond in materials science and chemistry is sending shockwaves through the respective industries. The area of sorption in general will be going through major changes in coming years, after nearly a century of chemisorption and physisorption dominating interfacial and surface science.

The experiments carried out by this research team provided the first examples of artificial molecular pumps being used to adsorb molecules onto a (solid) surface, and in turn this technology now opens the doors for a range of molecules to be attracted to the surface of many functional materials. Metal oxides, zeolites, micellar nanoparticle and polymer networks are just a few of the materials that this new technology will directly affect.

The importance of this research has been noted in the field, with experts stating that the ability to extract chemicals from solution onto and into surfaces and solids changes the game when it comes to recovering precious metals, separation science, filtering pollutants and waste, and biological and chemical analysis, among many other areas. Until this research, scientists have not been able to actively manipulate these processes, but molecular machinery is helping to change that.

Miniaturization has been one of the main drivers of advancements in technology for years, and with the utilization of machines that are the same size as molecules, this trend will continue with power adsorption. It will also help to reduce energy consumption as the area of separation is typically very energy-intensive, and therefore cost-intensive as well. One of the main processes that experts are excited about is the ability to drive separation directly from solar power, as the power needed is much reduced using electromechanical methods to drive these processes. Key industrial targets like micropollutants, carbon dioxide and hydrocarbons can now be cost-effectively collected. The repercussions for this breakthrough are endless, and all of them are positive.

Have you heard of mechanisorption before? Did you realize it could have such a profound effect on the energy industry and our world as a whole? Engineering360 would love to hear your thoughts on this exciting new development in the comments below.

By posting a comment you confirm that you have read and accept our Posting Rules and Terms of Use.
Advertisement
RELATED ARTICLES
New Membrane Could Boost Efficiency of Carbon Capture
High vacuum pumps: Operation, specification and configuration
Watch magnetic nanobots grab pollutants from water
Oxygen supply for space missions inspired by comet chemistry
Odorless diapers achievable thanks to activated carbon?
Advertisement