University of Tokyo researchers have developed a lightweight thermal sensor that can be used in devices to monitor body temperature without additional display circuitry.

Flexible and wearable devices are increasingly being developed for healthcare and other applications where temperature and other sensors provide feedback on patient health and well-being. Although many low-cost flexible body-temperature sensors have been developed, they require external circuitry to amplify the signal to allow accurate temperature measurement.

In their research, Professor Takao Someya and Dr. Tomoyuki Yokota’s research group at the University of Tokyo Graduate School of Engineering has developed a printable, flexible, lightweight temperature sensor that shows a change in electrical resistance of up to 100,000 times over a range of 5 degrees centigrade, allowing accurate temperature measurement without additional display circuitry. 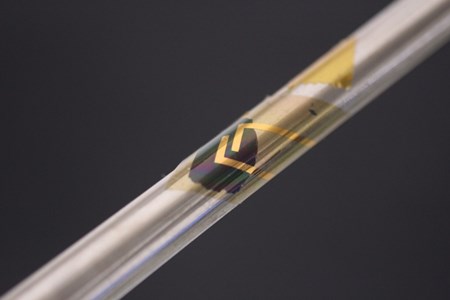 The research group achieved target temperatures between 25-50 C, a range that includes average human body temperature, and simultaneously realizing response times of less than 100 milliseconds and a temperature sensitivity of 0.02 C. The device was also stable even under physiological conditions, providing repeated readings up to 1,800 times.

The research group tested their sensor by printing a flexible thermal monitoring device that was placed directly on the lung of a rat to measure lung temperature. The device successfully measured cyclic changes in lung temperature of 0.1 C as the animal breathed, demonstrating its utility as a sensor for monitoring body vital signs in physiological (internal) settings.

“By printing an array of these sensors, it is possible to measure surface temperature over a large area,” says Someya. "Because the huge response of the sensor to temperature change allows us to simplify the circuitry, we could print our sensors onto adhesive plasters that could then monitor body temperature."

For example, a plaster applied directly to a wound or after surgery could provide warning of infection by detecting local changes in temperature due to inflammation. Other possible applications include wearable electronic apparel, in which the sensor could be applied beneath fabric to measure temperature during sporting and other activities.